ONE HISTORICAL ACCOUNTING & LOCATION OF THE “BEAUTIFUL GATE”:

In my detective investigation for this POST, I discovered many scholars seem to disagree with the exact location of THE GATE CALLED “BEAUTIFUL”.

I tend to side with Leen Ritmeyer’s Archaelogical Design and his explanations of the historical account in relationship to The “Beautiful Gate” ; connecting the description found in Acts 3:2, 10: 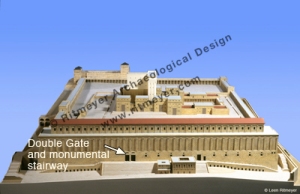 There was The Double Gate located at the southern wall of the Temple Mount.  A 210 feet (64 m) wide monumental stairway led up to this gate from the lower plaza.  Because of its monumental proportions, this gate was probably used by most pilgrims going up to worship and pray at the Temple [www.ritmeyer.com/2010/12/14/the-beautiful-gate-of-the-temple/].

THE MAN AT THE BEAUTIFUL GATE:

“[1] ONE DAY Peter and John were going up to the temple at the time of prayer–at three in the afternoon.  [2] Now a man crippled from birth was being carried to the temple gate called Beautiful, where he was put every day to beg from those going into the temple courts”  (NIV).

Here we see a man who was crippled at birth and earned his living by begging.  In taking liberties and reading “between the lines”, I began to look closely at the facts presented by Dr. Luke.

#1.  Every day, this man was carried to and from the church (“temple”) gate.  That FACT tells me that he had friends or family that helped him.

So, why do you think they called the “temple gate BEAUTIFUL”?

My guess is, the people might like to make their entrance here through the beautiful way and enjoyed the aesthetics of the place.  Especially the art work and engravings of Solomon’s Porch [above drawing].

But, how does the “crippled beggar” fit into this picture of perfection?

He doesn’t fit in! Presumably this majestic and beautiful gate prepared your mind to worship an awesome God.  Then you open your eyes and your smile of contentment begins to fade as you spy the beggar lying or sitting in the dust.  Your spirit feels fingernails screeching along a blackboard.

It’s like when driving down the road to the supermarket and glancing towards the curb at a stop light.  There stands an unkempt stranger holding a sign that reads, “HOMELESS – NEED HELP”.  You try not to give him any notice, feeling that eye contact will only encourage him.  OUCH!   “Another “homeless beggar” on the street.”  And soon as the RED LIGHT turns green, you step on the gas and you’re off!  Safe and secure from all alarm!

So Why Was The Beggar There?

Why do the temple authorities permit this to happen every day at the Church Gate?  The beggar wouldn’t sit there every day unless…he was making money.

What this shows to me is that the “church goers” had a heart for those less fortunate.  Not all the attendees were going for the “beauty experience”; they were going to worship God.  No one said the beggar was there by the temple (the visible dwelling place of God) because he hoped to be healed in his proximity to God.

Was this Beggar hoping for a miracle or is he looking for help from man?

“So when he (the “beggar”) saw Peter and John about to go into the temple, he asked them to give him a gift.  And Peter directed his gaze intently at him, and so did John and said, Look at us!  And [the man] paid attention to them, expecting that he was going to get something from them”  (Acts 3:3-5 AMP).

Based alone on the above verses, it’s clear to me… the man was looking for a “hand-out” and not a “hand-up”.  He was begging for monetary relief.

You might be thinking, “I’m not crippled, a beggar either.”  Maybe not physically crippled, but maybe crippled from brokenness or strife in your life over the years from all types reasons.

Mary Lowry and Buddy Greene wrote the lyrics to a great Bill & Gloria Gaither song that was popular in the 70’s:

Something beautiful, something good

All my confusion He understood

All I had to offer Him was brokenness and strife

But He made something beautiful of my life.

NOTICE ALL THE DISCUSSION ABOUT WHO IS LOOKING AT WHAT AT THE GATE CALLED “BEAUTIFUL”:

Verse 4 tells us that Peter and John looked, gazed intently, fixed their eyes, looked “straight at the beggar”.  Then Peter told the crippled man to look at them.  Was Peter suggesting that the beggar should look back at them…to receive a healing?  Did the beggar expect to get something in return for all this eye contact?

“YES”.  (See verse 5):  “And [the man] paid attention to them, expecting that he was going to get something from them.”  Peter wanted to have this man’s undivided attention!

So whose FAITH is revealed?

[6] “But Peter said, Silver and gold (money) I do not have; but what I do have, that I give to you; in [the use of] the name of Jesus Christ of Nazareth, WALK!  [7] Then he took hold of the man’s right hand with a firm grip and raised him up.  And at once his feet and ankle bones became strong and steady.  [8] And leaping forth he stood and began to walk, and he went into the temple with them, walking and leaping and praising God”  (Acts 3:6-8 AMP).

Did this “crippled beggar” have FAITH that he would be healed?

The Bible verses makes it clear–he expected money, not healing.  However, when he was told to walk he obeyed; the man crippled from birth, who was brought every day to beg before the Beautiful Gate, made the effort to rise up!

Don’t you wish that when things aren’t going the way you expected, that God would just “Do it”?  Well, if the “crippled beggar” wasn’t obedient to Peter’s words to STAND…would he have been healed, or would God have healed him right where he sat?

FAITH IS AN EXPRESSION:

I love Creflo Dollar’s definition of FAITH:  “Faith is…the practical expression of the confidence in God and His Word.”

The CRIPPLED BEGGAR was giving his practical expression; his faith being expressed in confidence and obeying the command of the apostles AUTHORITY.

Peter said in verse 4, “what I have I give you…”  And what did Peter have?  Did Peter have power to heal?

In my detective work this past week, I came upon a commentary Interpreting Acts by Harrison (p.79), where he says,  “In himself Peter had not more power to bestow healing than he had money in his wallet.”  Is Harrison right?

Matthew 10:8 reads,  “Cure the sick, raise the dead, cleanse the lepers, drive out demons.  Freely you have received, freely give.”

The Message Bible reads,  “Tell them that the kingdom is here.  Bring health to the sick.  Raise the dead.  Touch the untouchables.  Kick out the demons.  You have been treated generously, so live generously.”

Is this what Peter was giving in Acts 3?

According to Matthew 10:1, what Peter had, was AUTHORITY, in the name of JESUS to HEAL.

“AND HAVING summoned His twelve disciples, He gave them AUTHORITY over unclean spirits, to cast them out, and HEAL EVERY KIND of disease and every kind of sickness.”

PETER had authority to use Jesus’ name.  But he links two concepts together in Acts 3:16:

–He says “the faith that comes through [JESUS] has given complete healing.”

Do We Who Live in the 21st Century Have the Authority to Use Jesus’ Name As Effectively?

Here is just a few Bible references that will answer that question if you are in doubt of your effectiveness as you approach the Gate Called “Beautiful”:

The referenced verses above, all talk about “gifts” — all of us as Christians can have the same effectiveness through the Holy Spirit.

2 Corinthians 4:7:  “But we have this treasure in jars of clay to show that this all-surpassing power is from God and not from us”  (NIV).

As I looked more closely at the apostle Paul’s words in VERSE 7, what I received was–JARS HOLD SOMETHING!  And in this situation–a “treasure”.

So what is that “TREASURE”?

The knowledge of God reflected in JESUS (verse 6) in the POWER from God (verse 7).  “WOW”, I thought to myself.  Is “this treasure” not being shared with others?

Does the FACT that the “JAR” holds a treasure mean…the jar in and of itself is a treasure?

Peter confesses to Jesus,  Lord, I am ready to go with You to prison and death (verse 33).

Was this true, did he really know his own heart?

In verses 49-50 and John 18:10, the words cast additional light that reveals the servant who drew his sword was…PETER; it shows that Peter was willing to stand and fight and die for his Lord!

So how did Peter get from being willing to die to repeated denial in Luke 22:55-60?

He believed in his sword with the fact that together, they could win this fight.

When Jesus allowed Himself to be taken captive, it turned Peter’s ideas upside-down.  It wasn’t supposed to happen this way.  Do you see the same parallel occurring between the crippled beggar– at the gate called ” BEAUTIFUL”– and Peter during the Luke 22 happenings?

What stuck out clearly to me was the beggar was close to God but was depending upon man and his sharp Realtor’s idea of location, location, location; how to get man to provide for his own personal welfare…every day!

Peter was close to God, but depending on his sword and his idea of how things needed to turn out.

So if Peter is much like the beggar he healed in Acts 3, why does he get to heal?

In this First Church–why this apostle, this follower of Jesus in His ministry on earth…why does he have such moral superiority that he can call God to heal the crippled beggar?

I know that this a wordy question to ponder.  The point is…Peter doesn’t have “moral superiority”.  What he has is knowledge that he’s just a “jar of clay.”  And, the “jars of clay” and their treasures are as current in today’s churches as they were in the First Church!

Unlike the beggar, unlike his ideas accumulated in Luke 22, Peter now realizes the TRUTH!

“And Peter…answered the people,  You men of Israel, why are you so surprised and wondering at this (healing of the crippled beggar)?  Why do you keep staring at us, as though by our [own individual] power or [active] piety we had made this man [able] to walk?”  (Acts 3:12 AMP).

The realization is the “authority” allows the POWER of God to work through FAITH.

“Healers in Need of Healing”

Do we sometimes get confused in our churches we attend, believing that we are part of the “treasure” instead of just the “jars” holding the treasure?

Are you a devoted Christian as long as things go the way you planned?  And if they don’t, you find yourself “crippled” by circumstances to move on?

Do you believe you should get part of the “credit” for your work in advancing the gospel?

Some soul-searching questions to ask ourselves as Christians.  God works most powerfully through JARS, who clearly understand their role and content to trust God in whatever transpires.