Please, if you have the time, watch this YouTube Video of a scene from the movie Son of God.  This four-minute plus scene sets up my Bible study in John 11.

BEING LATE IS A BAD THING!

I’m a person who always believes in being punctual.  Being late is a bad thing.  My dad was the same way: “Better an hour early than 5 minutes late” he used to say.

TRAINS and PLANES leave at appointed times and connecting flights are dependant on the earlier flights being on time.  Delays or cancellations can cause big problems for people.

But by far the most punctual person in the universe is God!  He set up the galaxies and our solar system like giant timepieces, run with precision.  The timing of the sunrise–a thousand years from now–can be calculated to a millisecond.

So, how strange it is then, to find God being late!  God–all-knowing and all-powerful–how can He not be on time?

And yet, we find God being so late to heal a man that he even missed his funeral by 4 days!  We’ll look together at the Scripture in this blog-study and find out, how God “Being Late, Yet Still On Time!” will give some perspective and understanding.

[1] Now a man named Lazarus was sick.  He was from Bethany, the village of Mary and her sister Martha.  [2] (This Mary, whose brother Lazarus now lay sick, was the same one who poured perfume on the Lord and washed his feet with her hair.)  [3] So the sisters sent word to Jesus, “Lord, the one you love is sick.”  [4] When he heard this, Jesus said, “This sickness will not end in death.  No, it is for God’s glory so that God’s Son may be glorified through it.”  [5] Now Jesus loved Martha and her sister and Lazarus,  [6] So when he heard that Lazarus was sick, he stayed where he was two more days,  [7] and said to his disciples, “Let us go back to Judea.”

Note that Lazarus’ sisters, Martha and Mary, didn’t say, “Lord, the one who loves You, but the one You love.”

“This is LOVE: not that we love God, but that He loved us and sent His Son as an atoning sacrifice for our sins.”

Our LOVE to Him is not worth speaking of but His to us can never be enough spoken of.

Jesus has the POWER to alter the forces of nature; calm the winds and waves; to suspend the movement of the universe in answer to the prayer of one man.  Jesus did miracles with many elements–He made arms grow out, made bread and fish multiply, turned water into wine.  He didn’t have to be present to work a miracle.  He told the Centurion “Go your way, your servant will be made whole.”  Another long-distance healing was the Syro-Phoenician woman’s daughter.

No circumstances could stop Him.

No limit of time was a factor.

QUESTION:  Then, why does Jesus wait until a man, who He dearly loves, is dead, before setting out to help him?

Even the disciples knew there was a special bond between Lazarus and Jesus.  Imagine if you will, you or I call our best friend and say, “I think I’m going to die!”  And our friends’ response, “Well, I’m pretty busy right now.  It’s Sunday, I’m in church, I’ll try to make it by Friday.  Do you think you can hang on that long?”

Doug Greenwold, with Lamb & Lion Ministries, gives us a deeper look into the events that occurred:

“A messenger is commanded to go and find Jesus, to tell Him that Lazarus was about to die.  The messenger traveled by foot for two days, then faithfully informed Jesus about Lazarus’ condition.”

Here’s what I found fascinating.  When Jesus heard the message, He replied (verse 4), “This sickness will not end in death.  No, it is for God’s glory so that God’s Son may be glorified through it.”  Notice the very first thing that Jesus did.  He gave the messenger a PROMISE.  Jesus often does this when He’s going to stretch our FAITH.

He provides a PROMISE, and then He gives the reason why what’s about to happen was going to happen.

Lazarus’ sickness was not to end in death, rather it would be used for God’s GLORY so that God’s Son would be glorified through it!

Jesus didn’t leave right away.  So something puzzling was going on there.  We’re talking about God incarnate here, so everything Jesus does here is strategic and for a reason.

In Mr. Greenwold”s article, he points out something I never knew before, so I wanted to share this in the blog-study:

“The Hebrew view of death believed that when a person died during the first three days their NEPHESH, which is the Hebrew word for soul, hovered over their body.  In fact, by the beginning of the fourth day, the body would already be fallen into such a rapid state of decomposition, it would stink to high heavens, and then the NEPHESH flees.”

The upshot is for the first three days you’re just dead, but from the fourth day on, you’re totally dead-dead.

Why does this matter in the grand scheme of things?

Because the rabbis and the religious leaders had been teaching when the Messiah finally arrived, he would be able to achieve something so amazing they would easily know he was the prophesied one.  It’s so impossible to bring someone back from the dead.  Only the Messiah or his prophets could bring people back from death.

From the Religious Leaders’ Point of View –

If Jesus was really the Messiah as some had claimed, then the religious leaders, in order to keep their positions of wealth and power, would have to kill him.  They’d attempt creating some uncertainty.  They’d claim that bringing a person back from the dead during the FIRST DAY didn’t count.  The nephesh (the SOUL) hadn’t left yet.  Doesn’t count!  For Jesus to truly be THE MESSIAH, in the people’s eyes, Jesus needed to overcome this obstacle.

By Jesus delaying to answer the sister’s prayer and letting the situation to become seemingly hopeless and impossible…He showed more LOVE than anyone else!

NOTE:  GOD’S GREATEST INTENTIONS MAY BE SIGNALED BY HIS LONGEST DELAYS!

[11]  Then He said to me, “Son of man, these bones are the whole house of Israel.  Behold, they say, Our bones are dried up and our hope is lost; we are completely cut off.”

[13]  And you shall know that I am the Lord [your Sovereign Ruler],  when I have opened your graves and caused you to come up out of your graves, O My people.

Jesus’ DECISION was for His Disciples too!

God may be delaying because DELAYING is good for us!  He may be testing our faith or developing perseverance in us.  It may actually be dangerous to give us something at the moment we first ask.

Another idea is that God is setting up an impossible situation, in order that He may perform a MIRACLE or an even bigger miracle!

So the question may come up in your mind, “How long will God wait?”

And the answer?  TILL IT STINKS!

Sometimes Jesus waits until the situation you find yourself in really “stinks”.  When it “stinks,” God will get complete GLORY!

Another REASON God Waits So Long…RESURRECTION LIFE is not for the living, it’s for the dead! 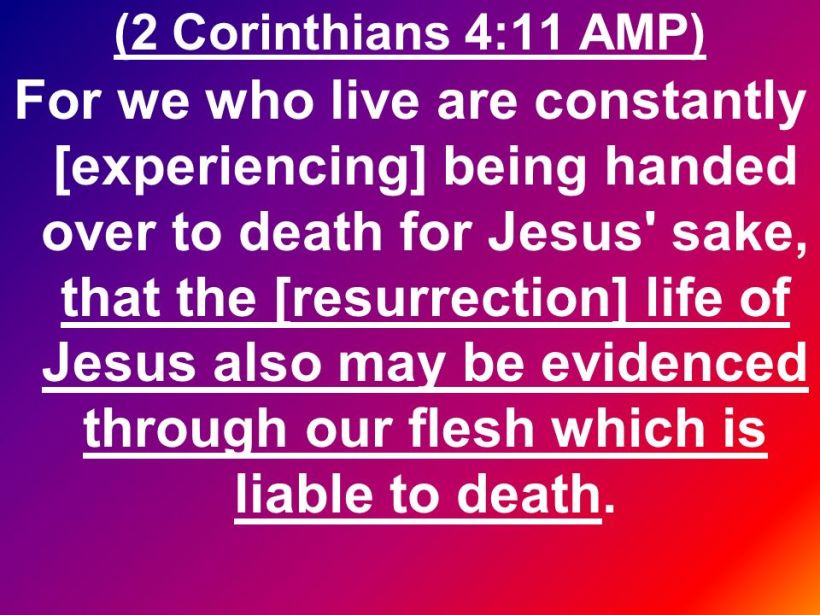 THE PRINCIPLE IS LIFE OUT OF DEATH!

We must grow in our handling a bumper crop –

You don’t see a young apple tree bearing 150 apples; if it did, it would collapse under the weight.  Over time, God strengthens and prepares the tree so it can handle the weight for what it can bear in maturity.

It’s the same way with us.  We want everything NOW!  But God knows we can’t bear it, so He only gives us an apple or two until we grow stronger.

Jesus said to Martha,  “I AM the resurrection…”  That’s present tense.

The word “patience,” doesn’t occur in the Old Testament, but we have “patiently” in Psalm 40:1; meaning to “wait,” “to expect,” or waiting on God.

PATIENCE is often hard to give and maintain, but in Romans 15:5, God is called “the God of Patience” (ARV – “steadfastness”) as being able to grant that GRACE to those who look to Him and depend on Him for it.

NEVER CLOSE THE BOOK OF YOUR LIFE WHEN GOD HASN’T FINISHED WRITING YOUR STORY!

[35]  So do not throw away your confidence; it will be richly rewarded.

[36]  You need to persevere so that when you have done the will of God, you will receive what He has promised.

Never hang up–throw in the towel–when God is still on the line with you.  Hang in there!  God is still working in your life!!

God wants us to know that even if we don’t see Him, He’s always there and He will be on time! 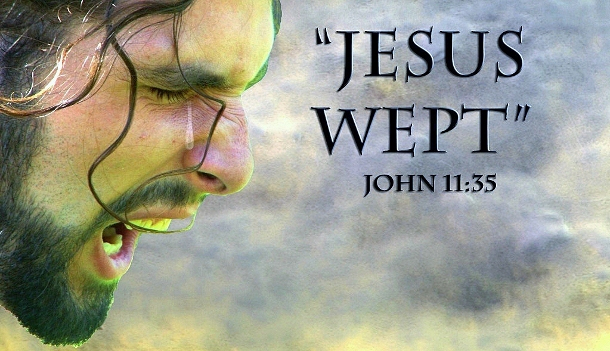 Many teachers have asked the question and attempted to explain why JESUS WEPT.

Jesus knew at the time that in a matter of minutes He was going to raise Lazarus from the dead, yet He still wept, because He felt the hurt of Mary & Martha’s pain so deeply that He grieved for their hurt.  HE WEPT!

Jesus is touched by feelings of our own infirmities, our pain, our grief.

Let us then turn EVERYTHING over to Him in prayer.

Credit and courtesy of LAMB & LION MINISTRIES Deeper Insights Into the Resurrection of Lazarus by Doug Greenwold.