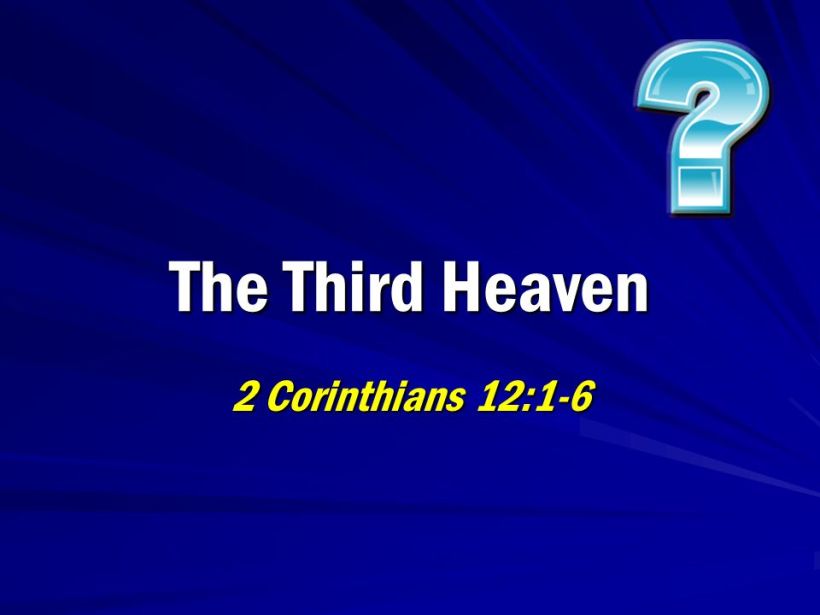 [1]  I must go on boasting.  Although there is nothing to be gained.  I will go on to visions and revelations from the Lord.

[2]  I know a man in Christ who fourteen years ago was caught up to the third heaven.  Whether it was in the body or out of the body, I do not know–God knows.

[3]  And I know that this man–whether in the body or apart from the body I do not know, but God knows– [4] was caught up to paradise and heard inexpressible things, things that no one is permitted to tell.

[6]  Even if I should choose to boast, I could not be a fool, because I would be speaking the truth.  But I refrain, so no one will think more of me than is warranted by what I do, or say…

What Paul says in verse 1, he is forced to say so that the Corinthian church members might look at him from God’s perspective.

Paul’s restraint increases as he discloses what was probably the most intimate and sacred of all his Christian experiences.  Paul repeats that he is speaking of himself only because circumstances have compelled him to do so.

What Does the Bible Tell Us About the Experience of Death and About What Happens Next?  [2 Cor. 12:2-4]

“The Journey to Paradise” – Revelations, and Visions:

Revelations are apocalypses, literally “to remove the cover, to unveil.”  It’s the unveiling of something hidden which gives light and knowledge to those who see it (Eph. 3:3; Rom. 16:25).

Visions, dreams, and trances are hard to distinguish.  A vision comes to one in an ecstatic state (Isa. 1:1; Ezek. 12:27) and brings revelation knowledge.  The experience points to a special awareness of God concerning what He is doing or going to do.

Several years ago I was asked by a local pastor if I could write a play for the upcoming Resurrection Sunday.  I was given two months to put everything together.  And by the way…I’ve never done anything like this before.  So lacking confidence, not knowing where this was going, I began to pray for guidance.  NOTHING!

Then, perhaps out of desperation and lack of faith, I found myself lying face down on the carpet pleading for God to give me inspiration.  And then I heard in my spirit, “Mel, get up from the floor, and wait.”  “Wait?  I have a month to put this all together, Lord!”  His response was “Just wait”.

That night in my sleep, I felt a nudge to my shoulder and thinking that I was dreaming, rolled over to the other side.  Again a nudge, but harder this time.  As I sat up on the edge of the bed, the voice returned:  “Mel, get up and go to the dining room table.  Get a pen and a paper tablet and I will give instructions on what I want you to accomplish.”  This was at 5:30 AM.  Was I still dreaming, is this really happening?  I got up and followed His guidance and instructions and at 7 AM the outline was finished.  The storyline, the set design, the title….everything but a script!  Yes, God even took care of that.  Was this a dream, a vision, a revelation?  All I do know is, the experience showed me what He was doing and going to do!

Most Bible scholars believe Paul had a near-death experience.  Paul mentions that at least on one occasion he was left for dead.  As he writes he speaks of this experience and says some guy he knew had it.  Writing about something that happened to an author and inventing a second person to deliver a message is common literary practice.

Paul, in 2 Corinthians 12 speaks from experience that there are events that follow our physical death.  The burden of this conversation prepares us, not for death, but for the events that take place between our dying and our final destination. 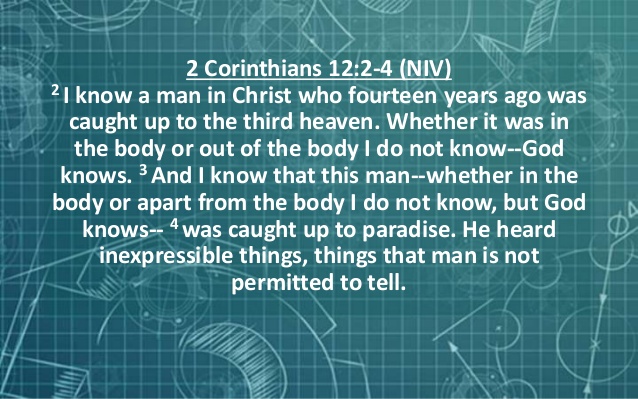 One vision which Paul recounts stands out from the rest in its extraordinary character.  His ecstatic episode which he was transported to Paradise began in VERSE 2.

Paul is sure his remarkable experience occurred but uncertain whether the “caught up” [RAPTURE] experience was in the body or out of the body.

At any rate, such a one was caught up (Gk. harpazo, “to snatch away”).  “Caught up” is a form of the Greek word harpazog, the same word used in 1 Thessalonians 4:17 which in reference to the RAPTURE of the Church.

Paul was “raptured” to the third heaven.

The third heaven designates a place beyond the immediate heaven of the earth’s atmosphere of clouds and beyond; the further heaven of outer space and its galaxies and into the presence of God Himself.  (Heb. 4:14, 7:26; Eph. 4:10) 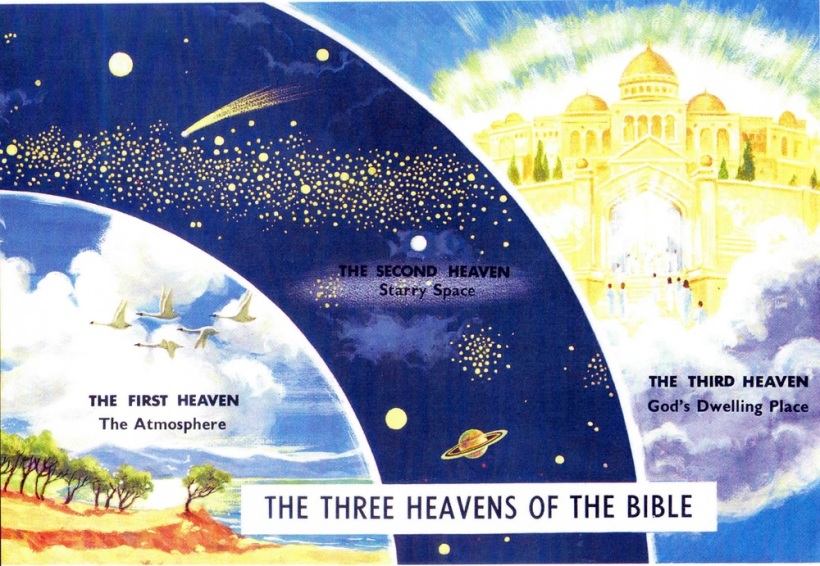 The FIRST HEAVEN is atmospheric, the SECOND HEAVEN is composed of the stellar universe, and the THIRD HEAVEN is the unique dwelling place of God–a different dimension.

In VERSE 3, Paul again clarifies his mystifying experience to his readers.  He’s uncertain if he was in a bodily or disembodied state.  Whether his soul was separated from the body for a time and taken up into heaven, or whether he was taken up, body and soul together, he wasn’t sure.

[3] “And I know that this man–whether in the body or apart from the body I do not know, but God knows–“

VERSE 4 teaches us that human words are inadequate to tell us about heaven.

If the THIRD HEAVEN describes the place of his rapture, then Paradise specifies the wonder of his rapture.  [The third heaven of v. 2 and the Paradise of v.4 are one and the same.]

Paradise is a Persian word for an enclosed park, garden or pleasure ground used only three times in the New Testament.  In Luke 23:43 with the thief on the Cross, and in Revelation 2:7.  In the Old Testament, this term is used in Genesis as the Garden or Paradise or Eden.

I believe Paul witnessed the state of the spirit-souls of the redeemed who had died are “at home with the Lord” (2 Cor. 5:8), but still in a “celestial body” so we won’t feel naked until the day when we are covered with the glorified and incorruptible resurrection body (2 Cor. 5:1-3. 1 Cor. 15:42, Phil. 3:20-21).  Then the REDEEMED of the Lord will shine forth with full splendor of eternal Christ-likeness.

Unspeakable word is an oxymoron, speaking which may not be spoken, for even in the heavenly state it is beyond words. 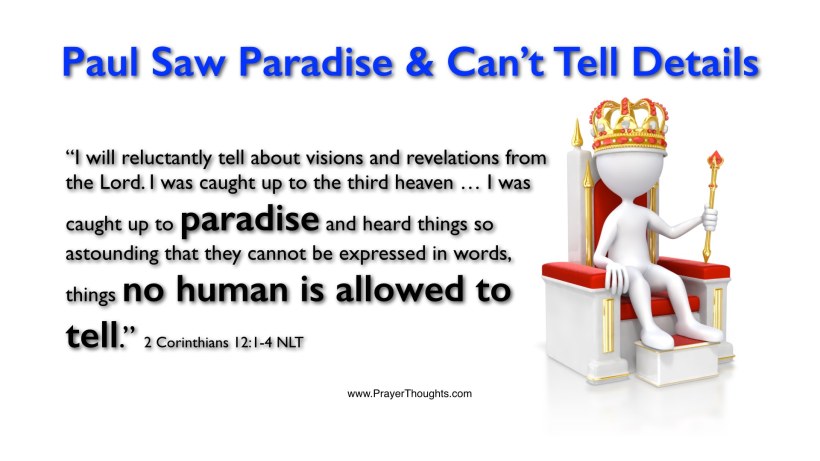 Human language is too inadequate to describe things that transcend all knowledge and understanding.

We often speak about Paradise trying to describe its state and heaven to define its features and whereabouts, but the truth is that we are stepping over the threshold into another dimension, a reality not of this world, infinite, spiritual and only distantly sensed by us in our earthly tent.  And yet as born-again believers in Christ, we know with assurance that one day we’ll be at our permanent home.

From Paul’s experiences, we are granted a view of the indescribable GLORY that lies ahead and thereby secured him to patiently endure all the severe suffering in his ministry.  He thus knows that the sufferings of this present age were not worthy to be compared with the glory that is to come (Rom. 8:18; 2 Tim. 4:18).

Someday we will arrive in heaven realizing that everything we see and experience is new and indescribable in earthly vocabulary.  I’m so thankful that God used illustrations that we could understand that gives us just a glimpse of eternity.

Paul could have boasted, as his rivals do, of impressive religious credentials, experience, and achievements, but he doesn’t.  Instead, he speaks only of his weaknesses.

[5] “Of this same [man’s experiences] I will boast, but of myself (personally) I will not boast, except as regards my infirmities (my weaknesses)”  [AMP}

Paul’s weaknesses, trials, and tribulations he went through for Christ’s sake, that had left him broken of body, mind, emotion, and spirit.  For these areas became the very places where God could do His greatest work in and then through Paul.

Paul wouldn’t be like his opponents who glorified in their earthly state or pride.  For God alone is due to all the glory!

Though boasting includes many lies, in verse 6 Paul affirms his trustfulness.

[6] “Even if I should choose to boast, I would not be a fool, because I would be speaking the truth.  But I refrain, so no one will think more of me than is warranted by what I do or say”  [NIV]

Although all of Paul’s boasts were true and about true occurrences, not to mention all the other reasons he could boast, he didn’t dwell on those things.

And the reasons why?

Others might think too highly of him.  He didn’t want to be judged by the past, or what he said about himself, but that men should judge him by what they presently heard and saw.

[NOTE:  I will continue this study, being CAUGHT UP, with Part Two in the Series – The Leading Up To Our Final Destination.]

2 thoughts on “Caught Up to Heaven [A SERIES]”