In 1982, an American action film hit the box office, “First Blood”.  It was co-written by Ted Kotchheff and starred Sylvester Stallone who became known to most of us as “Rambo”.

It was based on David Morrell’s 1972 novel of the same name.  I remember a line in the movie that plays into the movie’s title when he said to his pursuers, “You drew the first blood” and as odd as it may seem, while I was reading in my Bible, the Letter to the Hebrews, this movie theme played in my head as I studied and took notes for this study, FIRST BLOOD.

[4] And Abel also brought an offering–fat portions from some of the firstborn of his flock.  The LORD looked with favor on Abel and his offering…

It was a sacrificial lamb.

His brother Cain’s offering was far more attractive than Abel’s was, but Abel’s was what God wanted.

There’s only one way to approach a holy God and that’s through shed blood (Hebrews 9:22).

It’s an echo of Leviticus 17:11 “For the life of a creature is in the blood, and I have given it to you to make atonement for yourselves on the altar; it is the blood that makes atonement for one’s life.”

While the first blood shed by Abel was prophetic and pointed forward to that which was to be, the blood of Jesus, on the other hand, it declares the whole work of salvation is finished.

This brings us to our study in the New Testament in Hebrews 9:10-28 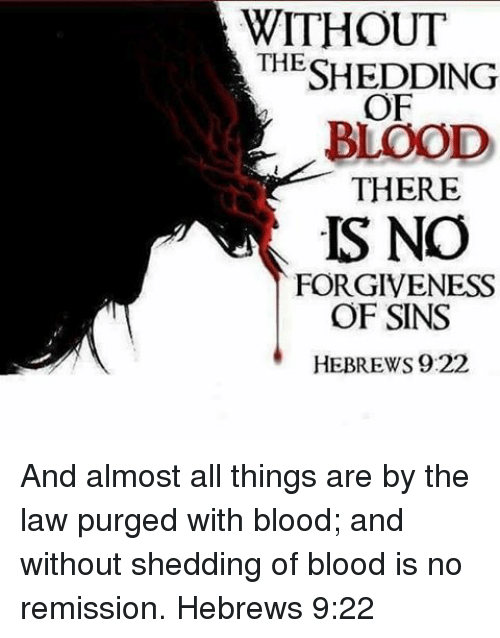 JESUS is in heaven right now and seated at the right hand of the Father, guaranteeing the promise of the COVENANT with two aspects:

[11] When Christ came as high priest of the good things that are already here, He went through the greater and more perfect tabernacle that is not man-made, that is to say, not a part of this creation.  [12] He did not enter by means of the blood of goats and calves, but He entered the Most Holy Place once for all by His own blood, having obtained eternal redemption.  [13] The blood of goats and bulls and the ashes of a heifer sprinkled on those who are ceremonially unclean sanctify them so that they are outwardly clean.  [14] How much more, then, will the blood of Christ, who through the eternal Spirit offered Himself unblemished to God, cleanse our consciences from acts that lead to death, so that we may serve the living God!  [15] For this reason Christ is the mediator of a new covenant, that those who are called may receive the promised eternal inheritance–now that He has died as a ransom to set them free from the sins committed under the first covenant.

Jesus has shed His blood for us on Calvary 2,000 years ago and now appears in Heaven to plead for us.

[16] For where there is a [last] will and testament involved, the death of the one who made it must be established.  [17] For a will and testament is valid and takes effect only at death, since it has no force or legal power as long as the one who made it is alive.  [18] So even the [old] first covenant  (God’s will)  was not inaugurated and ratified and put in force without the shedding of blood.  [19] For when every command of the Law had been read out by Moses to all the people, he took the blood of slain calves and goats, together with water and scarlet wool and with a bunch of hyssops, and sprinkled both the Book (the roll of the Law and covenant) itself and all the people.  [Leviticus 14]

[20] Saying these words:  This is the blood that seals and ratifies the agreement (the testament, the covenant) which God commanded [me to deliver to] you.  [21] And in the same way, he sprinkled with the blood both the tabernacle and all the [sacred] vessels and appliances used in [divine] worship.

[22] [In fact] under the Law almost everything is purified by means of blood, and without the shedding of blood there is neither release from sin and its guilt nor the remission of the due and merited punishment for sin.

A COVENANT is an agreement, but it also means “last will and testament.”

The thing about a “will” is that it doesn’t come into effect until a person dies.

In order for the terms of the New Covenant to come into play, Jesus had to physically die on the Cross.

[20] In the same way, after the supper He took the cup, saying, “This cup is the new covenant in my blood, which is poured out for you.”

Even the Old Covenant was established on the basis of the ‘first’ blood so to speak, but the blood, fire, water (Num. 31:21-24) couldn’t change a person’s nature.  (The altar, ark, people didn’t change when the blood was put upon them, but it did change God’s relationship to it).

The reason why blood was such a big variable in the Old Covenant was that God required BLOOD to be shed before sin could be forgiven (Lev. 17:11).

The Old Testament saints were saved the same way we are with the finish work of Christ Jesus. 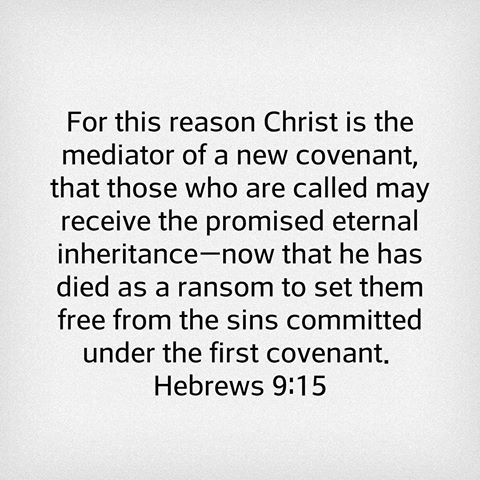 People before Christ’s death on the Cross were promised a Messiah/Redeemer by God, they died believing/trusting that God Promise would be fulfilled, however, this is really important…they died with the promise unfulfilled.

One of the first accomplishments of Jesus’ death was to REDEEM all those who had believed in God under the Old Covenant (Christ’s atoning death was retroactive).

In the financial world, redemption is “a removal of a financial obligation by paying off a note, bond, etc.” [Dictionary.com]

In a way, the believers of the O.C. were saved on “credit” or a “note,” and Jesus was the actual payment, “redeeming” the note.  The only way a person could come to God was to have the penalty of his SIN paid for and Jesus provided it for everyone who trusts Him.

He was the bridge!

With Jesus dying on the Cross, He legally died and His Last Will & Testament was legally enacted.

Our inheritance is primarily spiritual in nature. Forgiveness, spiritual gifts/fruit, the changing of our nature.

When Jesus died, what all the ‘first blood’ that had been offered up until that time couldn’t do, Jesus accomplished.

One of the richest men in the world when he died in 1976.  His fortune, which he accumulated as an aviator, inventor, engineer, filmmaker, had an estimated worth in the billions when he died.  In the final years of his life, he spent them as a recluse in a Las Vegas hotel as his OCD (Obsessive-compulsive disorder) took its hold.  Upon his death, it was discovered that he had no WILL made.  All his wealth was divided by the State to 22 cousins.

When Jesus died on the Cross, His last Will and Testament came immediately into force.  He designated all His wealth, power, authority to His children…us!

How foolish we are to fail to claim our inheritance in Him!

OUR LORD BECAME THE SACRIFICE FOR OUR SIN.

He is the better sacrifice, a final sacrifice.

[25] Nor did He enter heaven to offer Himself again and again, the way the high priest enters the Most Holy Place every year with blood that is not his own.  [26] Then Christ would have had to suffer many times since the creation of the world.  But now He has appeared once and for all at the end of the ages to do away with the sin by the sacrifice of Himself.

His final Will & Testament was notarized on Calvary’s Hill.

If you’ve ever had to get an official transcript from a school, or an official copy of your birth certificate, it had to have the official seal on it to be valid.  A notary public will authenticate your signature on an important document by stamping it with his/her seal.

Even so, God’s Spirit is the SEAL on every true believer, showing that you are no longer your own.  He bought you with the blood of Christ and now you belong to Him.  No one can take you from Him!!!

He died, but He lives again!

He’s alive to serve as His own executor of His own estate!

He can enforce the PROMISE of His Will and His Will is incontestable because He lives in heaven as our guarantee!

When we come to God we must go through Jesus.  There’s no other way.  Jesus satisfies the Father, therefore no one comes to Him except through His Son, Jesus.

The idea that God accepts us as we are is unbiblical.  We come to Jesus just as we are, BUT…He doesn’t present us to the Father just as we are.  We are a 100% unpresentable as we are.  [God is holy, and SIN cannot be in His presence.]

So when God sees us, He sees Jesus instead; He sees Jesus’ sacrifice instead of our SIN.  His BLOOD PAYMENT for our sin instead of the penalty we deserve for our iniquities.

[24] For Christ (the Messiah) has not entered into a sanctuary made with [human] hands, only a copy and pattern and type of the true one, but [He has entered] into heaven itself, now to appear in the [very] presence of God on our behalf.

Jesus has taken us into the real Holy of Holies with Him through His SACRIFICE of BLOOD on the Cross.

I know where I’m going because I’m in the Will.

The only way we get into the Will is to be placed into the death of Christ Jesus and say, “God, I’m a sinner.  I place myself into the death and resurrection of your Son.  Be satisfied with me for His sake.”