Growing up in Southern California brings back fond memories of summertime camping with the family.  My dad was a city fireman for over thirty years and because of his work schedule of 24 hours on duty/24 hours off, he would have as many as three days and sometimes five off, plus accrued vacation time which led to many camping trips during many summers.

Setting up the Campsite was always an adventure.

Dad had to find the exact spot for the tent location.  He knew that the preciseness of location was a must or my mother would have him move the location to her liking.  The men (my dad, and brother), all three of us, would call my mom a ‘picky camper’!; the campsite had to be near the restrooms with hot and cold showers AND… the site had to be neat and clean for the entire stay.  Oh, and a clothesline was always stretched between two pine trees near the picnic table to hang out damp washcloths plus any wet bathing suits and towels brought back from the local swimming hole at the nearby river.

Mom wanted my brother and me to take turns in raking the campsite every morning after breakfast, then hook up the nearby hose to settle the dust in front of the tent.  “NO DIRT IN, OR ON THE TENT!”

The sad part in all of this…eventually, we had to leave and break down the campsite.  Although mom wanted the trip to be enjoyable for all, she also wanted her experience to feel like,,, let’s say, clean, tidy, and like home sweet home.

“But Mom, it’s all just temporary!”

WE LIVE IN A WORLD COMPOSED OF THAT WHICH IS ONLY TEMPORARY.

For,  “All people are like grass, and all their glory is like the flowers of the field; the grass withers and the flowers fall, but the word of the Lord endures forever.”  (1 Peter 1:24-35, NIV Bible)

ALL will eventually fade and pass away.  Only that which has its foundation built on and in God and in His Word will live on.

The TENT should remind us of the TEMPORARY NATURE of things which we deal with.

Abraham in the Bible Lived in a Temporary Tent but looked for a Lasting City [Hebrews 11:8-10]. 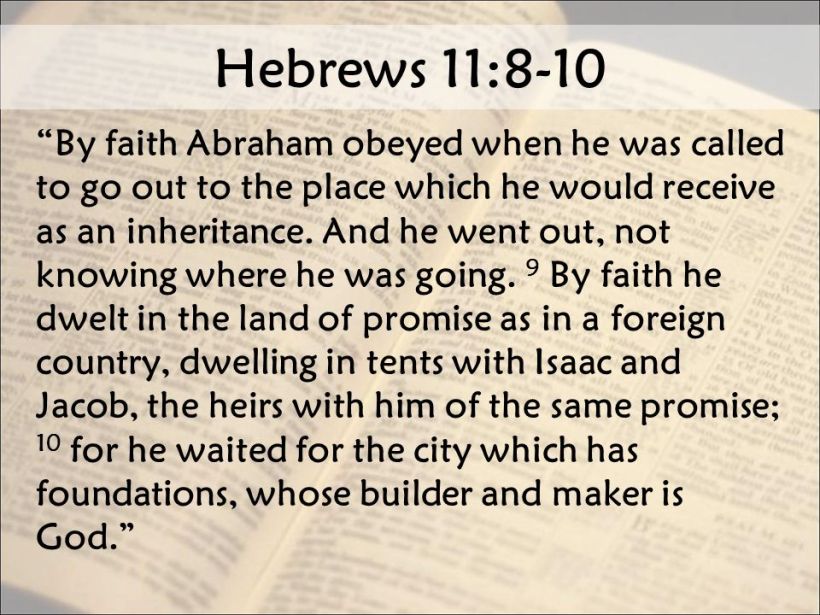 The Hebrew Nation dwelled in TENTS but looked for a HOMELAND.

The Israelites traveled for forty years in the wilderness and in doing so, they dealt with the “temporary” to achieve the permanent–Canaan, the Promised Land.

Each Year the Feast of Tabernacles is a Reminder.

It might surprise some, but Jesus kept the Feast of Tabernacles as well.  On the last day, “great day of the feast”, He stood in the Temple and cried out:

[37]  On the last and greatest day of the festival, Jesus stood and said in a loud voice, “Let anyone who is thirsty come to me and drink.  [38] Whoever believes in me, as Scripture has said, rivers of living water will flow from within them.”

God Lived in a Tent of Meeting (Tabernacle) but Longed for the Heart of Man (Exodus 29:46) –

The Tabernacle was a CONTRAST to the magnificent temples of pagan gods that surrounded God’s people.  When God laid out the CAMPING PATTERN for the Hebrews, the TABERNACLE was at the center while the twelve tribes camped around it in the shape of a CROSS.

That may be incidental, but God did teach them that He was in their midst–in the very heart of the Campsite.  Their lives flowed from Him and He taught them this arrangement would only be temporary.

Even the TEMPLE would picture the TEMPORARY–

God permitted the Temple that King David had proposed to build but the Tabernacle had been sufficient:

[5] “Go and tell my servant David, This is what the LORD says: Are you the one yo build me a house to dwell in?  [6] I have not dwelt in a house from the day I brought the Israelites up out of Egypt to this day.  I have been moving from place to place with a tent as my dwelling.  [7] Wherever I have moved with all the Israelites, did I ever say to any of their rulers whom I commanded to shepherd my people Israel, “Why have you not built me a house of cedar?”

The TEMPORARY was made visible when the VEIL in the Temple was torn (“rent”) from top to bottom at Jesus’ Crucifixion [Matthew 20:50-52].

God was mourning His Son–symbolized by the “renting” of His garment.

[16]  “Do you not discern and understand that you [the whole church at Corinth] are God’s temple (His sanctuary), and that God’s Spirit has His permanent dwelling in you [to be at home in you, collectively as a church and also individually]?

God dealt with the TEMPORARY to establish the PERMANENT [Jeremiah 31:31-34].

JESUS momentarily lived among us but looked for His Father’s EVERLASTING house (John 1:14) –

In the interim until His return, He’s preparing a PERMANENT PLACE in His Father’s House [John 14:1-6].

Jesus dealt with the TEMPORARY to establish the PERMANENT and we live in the Short-term but should look to the Eternal.

That brings me to some QUESTIONS for all of us to ask ourselves:

Especially notice what Paul is saying in the verses here.  He says, “For we KNOW [not we hope for or we expect or even that we believe] that if our earthly house of this TABERNACLE were dissolved, we have a building of God, a house not made with hands, eternal in the heavens.”  This is a very positive “KNOW”.  Paul knows because of the fact that the Holy Spirit has made it real to him.

That thought brought me back to my CAMPING DAYS as a young boy and as a father raising my own children believe or not.  Setting up a TENT in the middle of the day was hard enough, much less at night by car headlights as once happened in the pouring rain.  At the time, I was thinking, I hate tents!  No privacy, there always seems to be small rock poking my back in the floor of the tent–right where my sleeping bag lies.

I like CAMPING IN TENTS, but only for a short time, not for weeks on end.

So it’s a little disconnecting to hear how the apostle Paul describes life in this world, as a TENT CAMPING TRIP that lasts your entire life!  For we must KNOW that if this TENT that is our earthly home is destroyed, we have a building from God, a HOUSE not made with human hands, but an eternal home in the heavens.  For in this tent of ours, we GROAN longing to put on our heavenly dwelling.  We don’t often think of LIFE like this, do we?

We hurt at times, reminders that our earthly bodies are TEMPORARY structures: sore joints, aches, pains, diseases, you name it!  We can resonate with that language especially as we grow older as we GROAN to put on the heavenly dwelling!

But at the same time, even as we look forward to our heavenly body, TENT LIFE is still a little scary, because one day, for each of us, hearts will stop beating, and lungs will stop breathing, and the CAMPING TRIP is over.

TIME TO BREAK CAMP and it’s then we’ll be glad that we have another home!

So then, we are always full of good and hopeful and confident courage; we know that while we are at home in the body, we are abroad from the home with the Lord [that is promised to us].

Let’s be honest that many times we feel completely at home in our bodies [“tents”] and they’re all we’ve known.  I know every scar and can point directly to moles on my back that I’ve never seen with my eyes.  However, as long as I’m at home in this body, I’m absent from the Lord.

Paul explains that we WALK BY FAITH–We take God at His Word.  I don’t know about you, but I would rather take His Word than anyone else’s word.

FAITH is taking God at His Word.

Remember, who you are, that the soul never dies; the soul goes to be with Christ as a true believer–the ‘overcomer’.  It is the physical body that’s put to sleep.

RESURRECTION doesn’t refer to the SOUL or the SPIRIT.

The English word RESURRECTION is the Greek word “anastasis”, meaning a “standing up.”  It’s the BODY which will stand up.

Knowing these things, we WALK BY FAITH.

“Therefore, whether we are at home [on earth away from Him] or away from home [and with Him], we are constantly ambitious and strive earnestly to be pleasing to Him.”

The Greek word “philotin” is “to esteem as an honor”.  It is the same Greek word which is translated “study” in 1 Thessalonians 4:11 (NIV).

[11]  To make it your ambition to lead a quiet life:  You should mind your own business and work with your hands, just as we told you”

Be AMBITIOUS to mind your own business!

We should be Ambitious, LABOR, study. “to esteem as an honor” in such a way that we will be accepted of Him.  I’m not talking here about “works”.  This isn’t AMBITION to become a great somebody but to do our very best to PLEASE God.

Being ACCEPTED in Christ.

Being accepted in Christ is my…your standing before God at the “judgment seat of Christ” (2 Cor. 5:10).

God sees me in Christ, and He is made for me ALL that I need:

HE IS MY PERFECTION – I am COMPLETE in Him!

You can’t add anything to COMPLETENESS.

True believers have Christ, and we are accepted in the Beloved.

ACCEPTED in Christ Jesus the standing that ALL BELIEVERS have before God.

But to be ACCEPTED of Him is a different thing.

This has to do with our present state and refers to the way we are living our lives.  Are we living in the “tent” of ours for Christ’s sake?  Are we “ambitious” to live in acceptance of Him?

To be AMBITIOUS to be accepted doesn’t mean that we are to crawl over everybody and step on top of them in order to get to the top of the heap.

God gave His Word to the prophet:

“Should you then seek great things for your self?  Do not seek them.  For I will bring disaster on all people, declares the LORD, but wherever you go I will let you escape with your life.”

There are no guarantees in this world aside from the Grace of God.

This is what we hold onto in the storms we face here on this earth.  The TENTS of our lives get tattered and worn out, and they get blown about by the winds of struggle and conflict, and they get drenched by storms of tears and heartbreak and then get covered with the dirt of sin.

But we have a PROMISE to stand on that gets us through the storms.

And that PROMISE is, I’m going to have a glorified body [house] someday that will make a mansion look like a worn out tent, and my God has already paid for it in full!

KNOW THIS & STAND ON…

Footnote [i] :  Quote byMarvin Wilson, author of “Our Father Abraham – Jewish Roots of the Christian Faith.”