After reading my Bible this morning and given inspiration by the Holy Spirit for my next blog, I decided to borrow the title from a 13th century novel by Charles Dickens.  The book depicts the personal growth and personal development of an orphan nicknamed Pip and I thought there must be some parallels between Christ’s followers and Dickens’ character published in 1861.  I don’t think Mr. Dickens will mind too much. 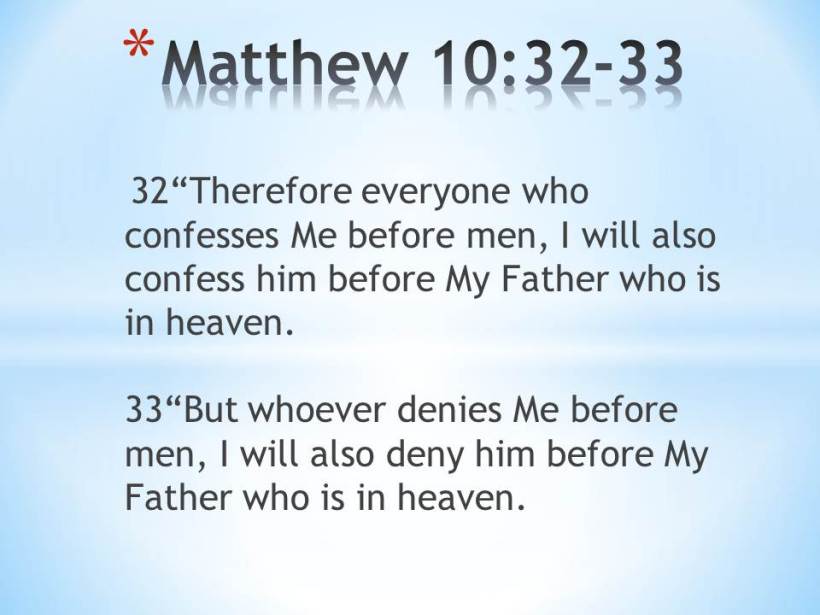 In this passage, Jesus tells us what He expects of His DISCIPLES.

The Dictionary defines a “disciple” as “one who accepts and follows a teacher or a doctrine.”

We could use that definition to define what a DISCIPLE of Christ is:  A person who follows Jesus Christ and His teaching.

Every Christian is a DISCIPLE.

The Big Idea:  Christ EXPECTS complete commitment from His followers.

In this passage of God’s Word, Jesus tells us what complete commitment looks like in the lives of His followers’

[32]  Therefore, everyone who acknowledges Me before men and confesses Me [out of a state of oneness with Me]. I will also acknowledge him before My Father Who is in heaven and confess [that I am abiding in] him.

[33]  But whoever denies and disowns Me before men, I also will deny and disown him before My Father Who is in heaven.

#1.  CHRIST EXPECTS HIS FOLLOWERS ACKNOWLEDGE HIM BEFORE OTHERS.

The phrase “whoever denies or disowns me” (v. 33) doesn’t refer to a moment of DENIAL of Jesus.  Peter denied Christ three times one night, but he never denied Him again.  That’s a comfort to me.  As a follower of Christ since 1972, I’ve had moments of denial, but I’ve repented my sin and proudly announce today that Jesus Christ is my Lord and Saviour.

A DISCIPLE of Jesus is NOT ASHAMED of the One he or she follows.

#2.  CHRIST EXPECTS HIS FOLLOWERS TO LOVE HIM MORE THAN ANYTHING OR ANYONE ELSE.

A college student once walked into a photo studio with a framed picture held closely against his chest.  It was a picture of his girlfriend and he wanted it duplicated which involved removing it from the frame.  In doing this, the owner of the studio noticed the inscription on the back of the picture which said, “Dear Tom, I love you with all my heart.  I love you more and more each day.  I will love you forever and ever.  I am yours for all eternity!”  It was signed “Mary,” and it contained a P.S.:  “If we ever break up, I want this picture back.”

There can be no P.S. in a life given to Christ.  We can never break up with Him.  His amazing LOVE for jus demands that we LOVE Him more than others.

CHOICES will have to be made –

SOMETIMES when a person becomes a Christian and his enthusiasm overflows from his/her decision, his or her family turns against them.

Therefore, a CHOICE must be made between Christ and family.  Family ties cannot be allowed to pull a DISCIPLE from complete allegiance to his LORD.

#3.  CHRIST EXPECTS HIS FOLLOWERS TO GIVE UP EVERYTHING TO FOLLOW HIM. 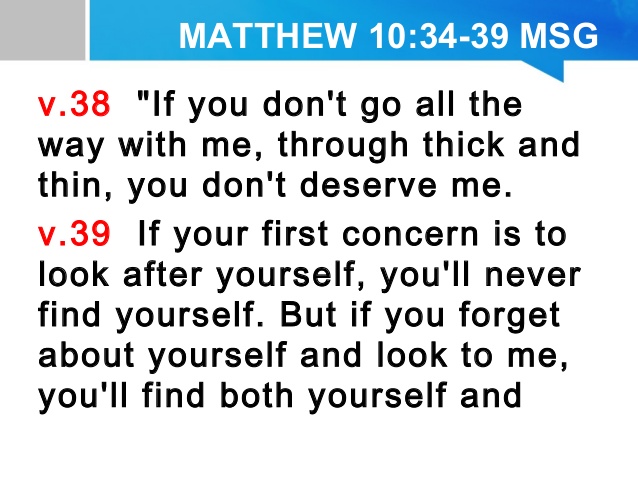 IN THE 1ST CENTURY, if anyone was seen carrying his CROSS, it was clear that he was on his way to die.

Jesus uses this word picture to describe dying in our own personal pursuits and follow Him completely.  Don’t get me wrong here.  It’s a good thing to have personal pursuits–goals for yourself and family.  But when they take precedence over following Jesus completely…

In Luke’s account, we are told that before Jesus spoke these words, “Large crowds were following Him” (Luke 14:25).

BUT the crowds gradually disappeared.

And we know the reason why.

It was because Jesus DEMANDED TOTAL COMMITMENT from His followers.  He made sure that people knew the cost of DISCIPLESHIP was high.

Christ has already counted the cost of DISCIPLESHIP for us.  The COST is…EVERYTHING we have!

Jesus once declared, “The kingdom of heaven is like something precious buried in a field, which a man found and hid again; then in his joy, he goes and sells all he has and buys that field.”  (AMP)

What the man received was so much more valuable than what he gave up–though it was everything he had.

The cost of DISCIPLESHIP is high; but compared to what we receive from Christ Jesus, the price is a bargain!

The TWELVE DISCIPLES had given up everything to follow Jesus, BUT, with the exception of Judas, they never regretted it because, as Peter declared, Christ has “the word of eternal life.”

He said, “Know this: DISCIPLESHIP is going to cost you whatever you have.  Don’t expect comfort and ease.”

“For what does it profit a man to gain the whole world, and forfeit his life [in the eternal kingdom of God]?”

The WHOLE WORLD refers to all the things that could possibly be achieved or acquired in this lifetime.

GAINING the WHOLE WORLD looks more appealing than losing everything for Christ.

BUT… the REWARD for following Christ is ETERNAL LIFE, while the RESULT of gaining the whole world is the loss of one’s soul.

Under Obedience As True Followers Of Christ Jesus –

A. W. Tozer said, [Years ago] no one would ever dare to rise in a church meeting and say, “I am a Christian” if he had not surrendered his whole being to God and taken Jesus Christ as his Lord as well as his Saviour, and had brought himself under obedience to the will of the Lord.  It was only then that he could say, “I am saved!”

Today, we let them say they are “SAVED” no matter how imperfect and incomplete the action, with the stipulation that the deeper Christian life can be ‘tacked on’ at any time in the future.

Do we really think we don’t owe Jesus Christ our OBEDIENCE?

We have owed Him our OBEDIENCE ever since the second we cried out to Him for our SALVATION, and if we didn’t give Him that OBEDIENCE, I reason to wonder if we are really converted!

I see and hear of things that Christian people are doing, and as I watch and listen to the profession of Christianity, I do raise the question whether they have been truly SAVED.  I believe it is the result of faulty teaching, to begin with.  They act as though the Lord is a hospital and Jesus is the chief of staff to fix up poor sinners that have got into trouble!

The person who says, “Save me, Jesus, but stay out of my life!” is NOT a Christian.

To that person, Christ says,

“Why are you so polite with me, always saying ‘Yes, sir,’ and ‘That’s right, sir,’ but never doing a thing I tell you?  These words I speak to you are not mere additions to your life, homeowner improvements to your standard of living.  They are foundation words, words to build a life on”  (Luke 6:46-47, The MESSAGE Bible).

THE COST OF DISCIPLESHIP IS HIGH–

BELIEVE that Jesus Christ died for your sin and rose from the grave.

COMMIT YOUR LIFE TO HIM!

Bible Translations:  NIV and Amplified Bibles, except where noted.

3 thoughts on “The “Great Expectations” of Discipleship”