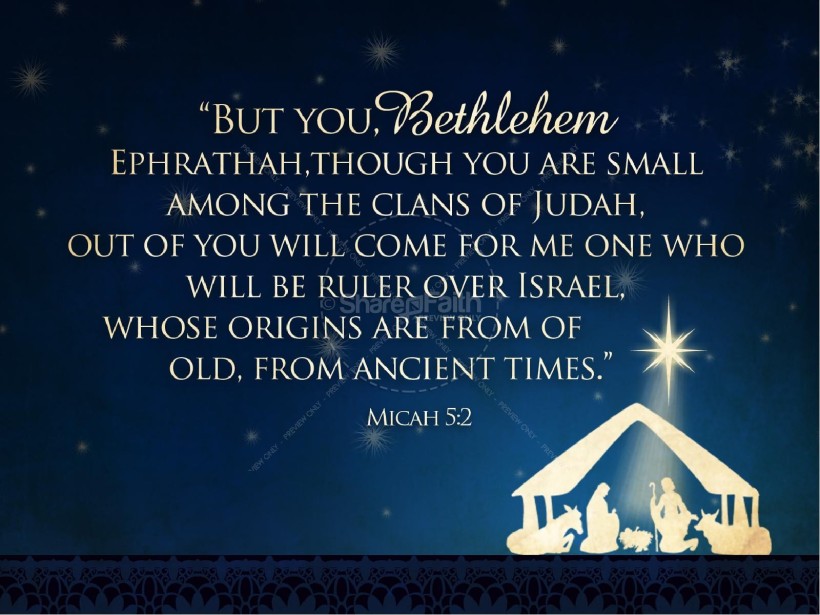 [1]  Marshall your troops now, city of troops, for a siege is laid against us.  They will strike Israel’s ruler on the cheek with a rod.

VERSE One is a prophecy or a “foretelling” of what is to come in the near future.  It is the PROPHECY that king Nebuchadnezzar was going to attack Jerusalem and that king Zedekiah would be struck on the cheek with a rod.  This all came to pass and king Zedekiah, the “ruler” at that time was taken captive and tortured resulting in the king being blinded.

This initial verse in Chapter 5 describes a picture of strife, defeat, and hopelessness.

The following verses are a contrasting picture of Micah 5:1 as the Prophet Micah changes direction in Verse 2 to a PROPHECY for the distant future.

Micah quotes the LORD who states He will send a King with the following attributes:

He will be born in Bethlehem, a town approximately 5 miles south-southwest from Jerusalem.

Compared to Jerusalem which was a large city with majestic buildings, Bethlehem was small.  When people ask me where I grew up I tell them San Diego, California.  But actually, I grew up in Pacific Beach/Clairemont, California which is an area located about 9 miles north of San Diego.  Very few people outside of the area know about “PB” because of its small and relatively insignificance.

Out of something small and weak God brings significance and strength. 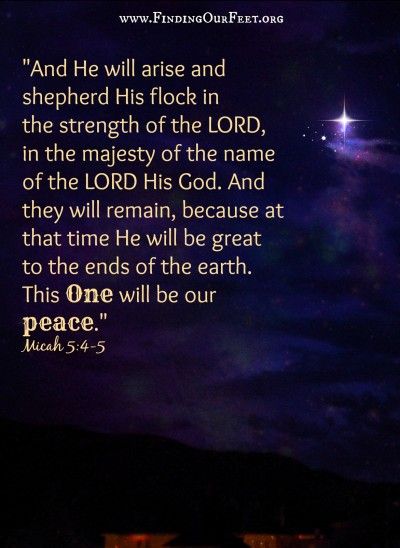 Out of this insignificant little town would come to the Messiah, the King of Kings who was in the beginning and forever will be.

He will be a shepherd His flock.

He will provide for them physical and spiritual needs.

He will care for them, unlike the earthly kings that look only to their own interests and well-being.

His extent of Authority will not be limited to Jerusalem or Israel but will stretch to the ends of the earth.

He will have complete AUTHORITY over every tribe, every kingdom, and every nation.  All because His flock can never be out of His reach or authority and He will be their PEACE.

Through the Christ-child born in Bethlehem, we have eternal security knowing that He has conquered Satan, death, and the grave that provides an eternal home for each one of us who believes in the miracle.  That is PEACE that cannot be shaken if we live our lives according to our Faith. 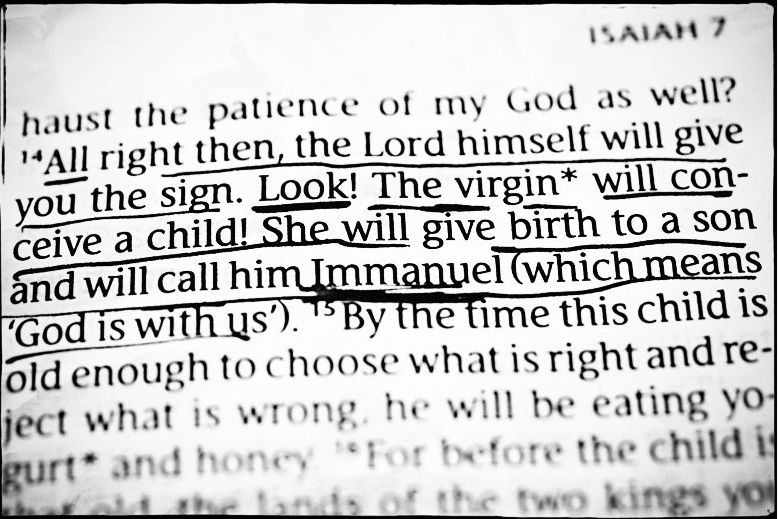 The second PROPHECY to look at regarding the BIRTH of Christ Jesus is in the Book of Isaiah.

Ahaz was the king of Judah at the time (approximately 700 B.C.) and was under the threat of attack from both Syria and Israel who made an alliance together.

God sent the Prophet Isaiah to Ahaz to give him the message not to lose heart but instead be calm, quiet and do not be afraid.  The LORD was telling him that he didn’t need to look to Egypt, or any other nation for armies of flesh because God was going to provide. He even tells Ahaz that “if you do not stand firm in your faith you will not stand at all.”  [Isaiah 7:9]

That MESSAGE applies to us as well.  Our FAITH isn’t something that should be worn around your our necks as a medal but it should dictate how we live our lives.

Ahaz must not have heard God’s message because it says “Again the LORD spoke to Ahaz”  (verse 10).  This time God even tells Ahaz to ask for a sign from Him that what He says is true.

Is it then OK to ask God for a sign?

Well, that depends on the motivation of the heart!

During Jesus’ earthly life the Pharisees asked for a sign but would not have believed because their only motivation was to trick Jesus.

Gideon asked for a sign to make sure that he was going to do God’s will and when he received the sign he obeyed the Lord’s directions in FAITH.

That’s what the LORD offered Ahaz but Ahaz in his pride and arrogance answers with a spiritual cliché saying, “I will not ask.  I will not put the Lord to the test.”

The truth here?  Ahaz didn’t believe, he didn’t have FAITH and he didn’t want to hear anything that was contrary to what he already planned.

Like Ahaz, many times we come-up with our own plans for the future and when God intervenes through the Holy Spirit we sense that still, small voice telling us that we should PRAY, or He gives us that uneasy feeling that what we are planning on doing is not what God wants us to do and many times we don’t want to hear it.  We like OUR plan and it makes perfect sense to us.

But the sign that God gave to Ahaz is the same sign that He gave to the whole world.  Isaiah told Ahaz, The third prophecy I want to look at with you regarding the BIRTH OF JESUS CHRIST in Isaiah 9:1-7.

[1] But [in the midst of judgment there is the promise and the certainty of the Lord’s deliverance and] there shall be no gloom for her who was in anguish.  In the former time [the LORD] brought into contempt the land of Zebulun and the land of Naphtali, but in the latter time, He will make it glorious, by the way of the Sea [of Galilee, the land] beyond the Jordan, Galilee of the nations.  (Amplified Bible)

“And His name shall be called Wonderful Counselor, Mighty God, Everlasting Father, Prince of Peace”

Jesus Christ, the Son of God has been given to us in a spectacular way.  Jesus refers to Himself as the Light of the World in John 2:12. This LIGHT shines regardless of the circumstances that surround us in this life.  It is the LIGHT that gives us hope because it shines in a DARK and DYING WORLD.  It is Jesus Christ who calls us and says…

“Come to Me, all you who labor and are heavy-laden”

With Jesus, we have HOPE, FORGIVENESS OF SIN AND ETERNAL LIFE.

All of this comes about because of God’s zeal.

It was God’s zeal for you and me that caused Him to send His Son Jesus to be born of a virgin in the little, insignificant town of Bethlehem so that God Himself could take on flesh and walk among us, experience life just like you and I, but without sin so that He could become our SACRIFICE paying the penalty for our sins.

He was crucified, dead, buried, rose again on the third day and ascended to heaven where He purchased a place for you and me and offering it as a FREE GIFT!

BUT THAT’S NOT ALL!

One day He is coming back because Jesus said,  “And if I go and prepare a place for you, I will come back and take you to be with me that you also may be where I am”  (John 14:3 – NIV Bible).

The proof given in God’s Word and is true and His PROPHECIES will all come to pass.  So this Christmas let’s CELEBRATE His birth remembering what He did for us, but let’s go even further than that, taking heed of what Micah said to Ahaz in Isaiah 7:9:

“He will bring me out into the light; I will see His righteousness”

Let’s live our lives according to what we BELIEVE so that others will truly understand the true meaning of Christmas and see that Great Light shining in the midst of darkness.