A school music teacher asked her class the difference between LISTENING and HEARING.  At first there was no response.  Finally a hand was raised and a youngster offered this wise definition:  “Listening is wanting to hear.”

As Christians, we should believe that the Holy Spirit is always speaking to us; (And He does not need to shout!).

The KEY here is that we must want to hear Him (Are we sensitive to the Spirit’s Voice).  Remember , He doesn’t waste His voice–He speaks to those who are willing to obey and listen!

In this Scripture passage, God speaks; but it appears there’s only one out of the four people who is actually listening!

vs 2:  “Six days later, Jesus took with Him Peter and James and John, and brought them up on a high mountain by themselves…”

Previously, there had been a watershed moment (8:29).  Simon Peter replied to Jesus’ question to the disciples “Who do you yourselves say that I am?”

From that time on, Jesus then explained to His disciples that He must die!  This is the FIRST TIME He had declared this news to His followers.  From now on, His direction is set for Jerusalem and the Cross.

THERE IS A PURPOSE FOR EVERYTHING!

[22] The Son of Man must suffer many things and be [deliberately] disapproved and repudiated and rejected on the part of the elders and chief priests and scribes, and be put to death and on the third day be raised [again].

[23] And He said to all, “If any person wills to come after Me, let him deny himself [disown himself, forget, lose sight of himself and his own interests, refuse and give up himself] and take up his cross daily and follow Me” [cleave steadfastly to Me, conform wholly to My example in living and, if need be, in dying also].

For both Jesus and the disciples, these six days prior was a time for reflection and this secluded mountain gave them time for contemplation.

For the disciples, each day that past week, the disciples must have pondered and discussed Jesus’ words about His death and resurrection.  No doubt they tried to figure out how this related; to the Old Testament promises of the kingdom of God.

Also, if Jesus was going to build a Church (i.e. Matthew’s gospel); what would happen to the promised kingdom?

For Jesus, it too was a time for reflection.

Luke in his version of this same event tells us (chapter 9 verse 29); Jesus went up the mountain to pray.  He had to be thinking through the situation that was ahead of Him in Jerusalem.

Miracle On The Mountain.

Scripture doesn’t name the place where this miracle took place; so we don’t know (but of course doesn’t stop people from guessing).

If you read the bible commentaries, they tell you that you have a choice of THREE; although no-one knows for sure!

Tradition says Mount Tabor, but Mount Tabor is quite small (1900 ft. high).  Not quite the “high” mountain described in Mark 9:2.  Also Mount Tabor was also topped with a fortified city which would hardly give the peaceful setting Jesus was looking for!

Mount Hermon (my personal choice), because both Matthew and Mark tell us it was a “high mountain.”

Mount Hermon is 9400 ft. high.  More importantly, it’s only 14 miles away from Caesarea Philippi where Jesus and His disciples were staying six days earlier.

Mount Jebel Jermak (or Jermuk) which is in upper Galilee is another choice (not on above map).  The highest elevation in that entire region (rising 4,000 feet above the Mediterranean Sea).  Again, from this mountain, it was a relatively short distance to Capernaum where Jesus and the disciples had been staying.

So there you have it.  THREE MOUNTAINS to choose from.  But no one knows with any certainty.

PETER, JAMES and JOHN regularly emerged as an inner group among the twelve. Once more, if we are honest, we don’t know why these were chosen!  We can only guess, and that’s what I’m going to do through my Scripture investigation.

Dr. G. Campbell Morgan (Jesus.org) points out that on THREE occasions, Jesus took these same disciples aside to go with Him.  All three occasions dealt with DEATH.

The Voice of Prophecy —verses 2-4 in the (Message bible):

[2-4]  Six days later, …Jesus took Peter, James and John and led them up a high mountain.  His appearance changed from the inside out, right before their eyes.  His clothes shimmered, glistening white, whiter than any bleach could make them.  Elijah, along with Moses, came into view, in deep conversation with Jesus.

The PHYSICAL ILLUMINATION clearly wasn’t easy for these men to put their experience into words, and the gospel writers describe what happened to Jesus in slightly different ways.  Remember, the brightest artificial light they knew was a feeble candle or an oil lamp.

What the disciples saw was SPIRITUAL as well as PHYSICAL.

The VEIL of Jesus’ humanity was briefly drawn back.

These 3 men saw Jesus in a way they had not done ever before.  This was a one-off unique occurrence and the only time while Jesus was on earth that He revealed His GLORY in this way.

I remember when I was a young boy in school, when the teacher held up a jar with a “cocoon”, as she called it, attached to a stick, walking up and down each row, making sure that we could all see the phenomena up close.

She mentioned that a caterpillar made the cocoon, then would change into a beautiful butterfly.  She called it, “metamorphosis”.

“METAMORPHOSIS” is the Greek word translated into English as “transfigured.” A metamorphosis is a change on the outside that comes from the inside.

For a few moments, Jesus’ physical body was TRANSFORMED into the likeness of what His resurrection body was to become in the glorified state [Young’s Bible Dictionary, pg. 802].  Jesus was “metamorphosed,” or ‘transfigured’; the change was on the outside that came from the inside.  THE GLORY of Jesus wasn’t reflected; but radiated from within!

Question:  Why did this experience on the mountain take place?

Answer:  To consolidate, to reinforce, to strengthen the disciples.

They had to learn the important TRUTH…that SUFFERING and GLORY must go together.

And consolidation for Jesus…?

“And Elijah appeared to them, accompanied by Moses, and they were holding a conversation with Jesus”  (Mark 9:4).

Have you wondered about what they were saying in conversation?  Well I did and I found the answer to that question in Luke 9 verse 31:

They spoke about His exit from life which He was about to bring to realization in Jerusalem.  They appeared to encourage Him to go on with His mission. Remember, in them (Moses & Elijah), ALL ISRAEL’S HISTORY recognized Jesus as its own fulfillment!  They recognized and knew Jesus as the One they had dreamed and spoke about!

And in all stories, there’s COMPLETION (verse 3).

The LAW and the PROPHETS was a description given to the whole of the Jewish Bible, the part we call the Old Testament.

Both men are the last Old Testament men mentioned in our English Old Testament:  Malachi 4:4-6, they both get a name check.

[5] Peter said to Jesus, “Master, it is good and suitable and beautiful for us to be here…”

Peter’s words here, are one of the great understatement of the Bible:  “It’s good to be here.”  This was an experience that both himself and John would never forget.

John would one day write (John 1:14b), “We [actually] saw His glory, such glory as an only begotten son receives from his father, full of grace and truth.”

Peter would one day write (2 Peter 1:17-18):  [17] “For when He was invested with honor and glory from God the Father and a voice was borne to Him by the [splendid] Majestic Glory [in the bright cloud that overshadowed Him, saying], This is My beloved Son in Whom I am well pleased and delight.  [18] We actually heard this voice borne out of heaven, for we were together with Him on the holy mountain.”

In VERSE 5, Peter seemed to be enjoying the experience so much that he wanted to prolong it.

His intentions might have been good ones, but they were also wrong.

Notice that Peter wasn’t selfish in his words.  He suggests they build 3 shelters, one for each special guest.  Not 4 (including one for himself), or even 6 ( a shelter for everybody!).  It was a foolish statement!  As if Jesus and the two visitors had no other means of protecting themselves against the cold.

Notice next, God does what Peter could not do; God Himself provided a SUPERNATURAL COVERING for them (VERSE 7): 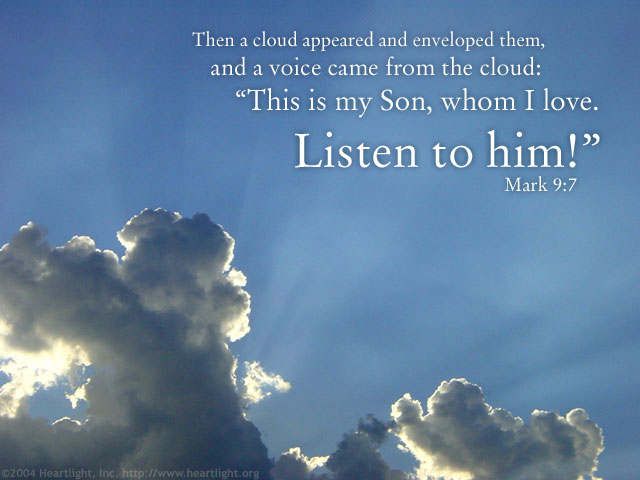 GOD’S VOICE spoke different things to those present on the mountaintop:

For Jesus, it was encouraging to have Moses and Elijah sharing with Him; telling Him that what He was doing was right.

But now, He had the VOICE of God, His Heavenly Father, publicly declaring what He was planning, by going to Jerusalem, was the right way.

The lesson for the disciples–JESUS is not just a successor but was superior to Moses and Elijah.  He is the FULFILLMENT of both the Law and the Prophets.

“JESUS ONLY” is God’s pattern!

So the SUPERNATURAL guests disappear!

Our Journey with the Disciples Down the Mountain.

Ah, yes, it happens!  Over the years of my Christian life, I’ve enjoyed many ‘mountaintop’ experiences.  But I would eventually find myself once again living in the ‘valleys.’

We are to use the truths and inspiration gained on the MOUNTAINTOPS as the disciples did; strengthening us for life down in the valley.

Jesus will be GLORIFIED as we serve Him daily…

So Jesus invites us to be His SERVANTS:  “SERVICE (servanthood) is not a list of things we do, though in it we discover things to do.  It is not a code of things, but a way of living.  To do specific acts of service is not the same thing as living in the DISCIPLINE of service”  [Richard Faster, “Celebration of Discipline”].

You see, it’s all about servanthood in the valley.

The Christian life is not primarily about moments of euphoria or periods of ecstasy, as nice and important as they are, but about being like JESUS in the real world. 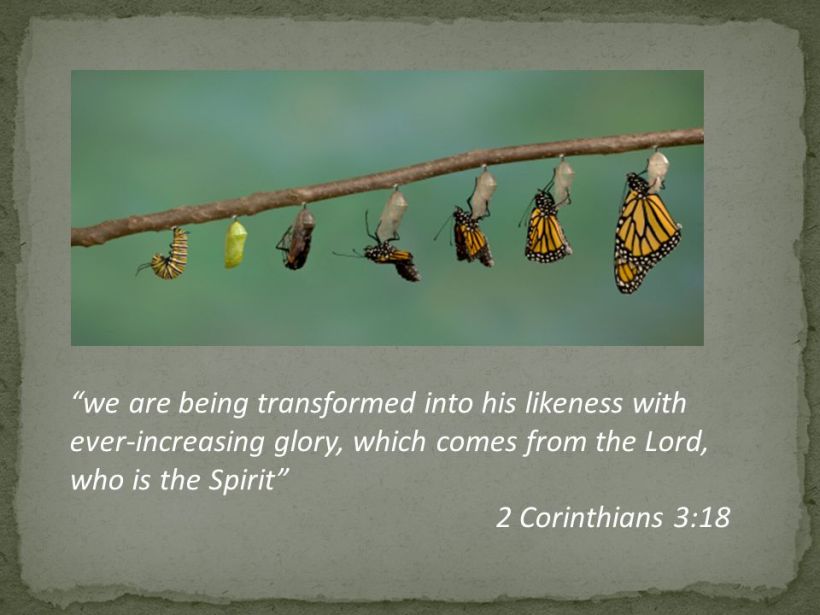 The New Roget’s Thesaurus in Dictionary Form by Norman Lewis.

2 thoughts on “A Glimpse of GLORY”