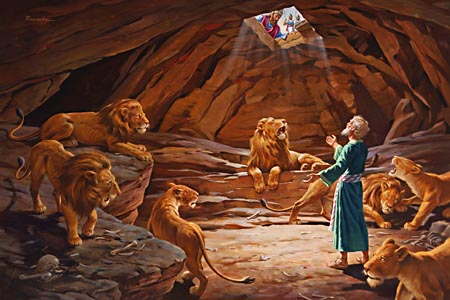 In my study this week, I discovered the two stories parallel each other and the more one meditates on God’s Word, the more amazing the parallel becomes.

There is no way that this is a coincidence.  This is just another way we can recognize how the Bible really is.

As we approach Resurrection Sunday (Easter) 2015, I wanted to take a look at the similarities between the two stories found in Daniel 6 and Matthew 27.

The peer groups (the presidents and the satraps) jealousy couldn’t find revenge because of Daniel’s excellent spirit within him.

Now as I read through the next few verses I was struck by Daniel’s reaction to the law of the Medes and Persians that king Darius had signed [no ‘veto override’ possible] as Law of the Land.

Yep, the conspirators PLAN ‘B’ was put into motion.  They knew by Daniel’s seeking his God, not once a day, but three times daily would put him in the vise grip of death.

When conspirators accused Daniel’s three friends of not bowing down to king Nebuchadnezzar’s golden image, the king in his intense anger, threw the three Jews into a fiery furnace (Daniel 3:19-23).

Darius’ reaction is the exact opposite.  When the king heard this report from his advisors about Daniel’s daily practice of seeking his God, he was greatly distressed.  He was determined to rescue Daniel and made every effort to save him from the death sentence until sundown.

But alas, a VOW had been made.  Under Medo-Persian law, Darius couldn’t plead that it was a mistake.  Nor, neither can anyone else who makes VOWS and OATHS to God (Ecclesiastes 5:1-7).

All of Darius’ efforts had failed to change the obvious outcome.

With smiles on their faces, the conspirators brought Daniel to the mouth of lions’ den…throwing the “law-breaker” to his fate–and the king said to Daniel at that moment in time,  reflects the CONFIDENCE of Darius  most translations.

Darius seemed to have a greater degree of faith than Daniel’s three friends, who were saying in Daniel 3:17, 18:

Bound by his own Decree and the Law of the Medes and Persians, Darius was POWERLESS to deliver Daniel from Den.

Interestingly, God was POWERLESS to deliver His only Son from the CROSS–being bound by His own prophecies of the Messiah and the Law of Holiness and Love which penetrates His very Being.

In Psalm 22, King David foretold what Christ thought and said on the Cross.  JESUS saw His enemies as  “a ravening and roaring lions” (v. 13).

In his Pentecost message, the apostle Peter quoted what David said about Jesus (Acts 13:35) taking from the words in Psalm 16:8-11.

God had PROMISED that His Son wouldn’t be abandoned to Sheol (the place of the dead), nor would His body see decay.  He would be RESURRECTED to life.

DANIEL, much like Isaac, was as good as DEAD but figuratively speaking, was received back from the dead (Hebrews 11:11-19).

The king’s FAITH can compare favorably with Abraham’s FAITH.

At the first light of dawn the king got up and hurried to the LIONS’ DEN.  When he came near the den, he called to DANIEL in an anguished voice, saying…

“O Daniel, servant of the living God, is your God, Whom you serve continually, able to deliver you from the lions?” (v. 20).

Ironically, none of JESUS’ disciples, at first light on the third day, hurried to the TOMB of JESUS and called out,

Repeatedly, Jesus told them He would RISE on the THIRD DAY, but their faith didn’t measure up to Darius’ faith.  Had they faithfully BELIEVED that God is able to RESCUE from the DEAD, they would have been there.

If DARIUS would have had a wavering faith, he never have called Daniel the “servant of the living God”, and uttered his cry to the Prophet.  Obviously, the light of Daniel’s witness led Darius to belief in the living God.

Scripture Comparison often becomes a tool that can lead to spiritual maturity in our lives.  So get your bibles, you’ll need them.

#2.   The administrators and satraps CONSPIRED against DANIEL.

— The Pharisees and Jewish leaders CONSPIRED against JESUS.

#3.   They follow DANIEL around and INVESTIGATE him, trying to find something they can charge him with.

— They follow JESUS around and try to find something to CHARGE Him with.  They ask Him trick questions such as,  “Should we pay taxes?” or “Should we stone the woman?”

#4.   DANIEL is found BLAMELESS.  They can’t find nothing to bring against him.

— JESUS is found BLAMELESS.  They can’t find anything to charge Him with.

#5.   DANIEL’s enemies come up with a plan to arrest him.

— JESUS’ enemies come up with a plan to arrest Him.

— JESUS’ enemies have to use a spy to catch Him.

#7.   When the PLAN is put into motion, DANIEL goes into a time of PRAYER knowing…if he PRAYS openly, he will be arrested.

#8.   After being arrested, DANIEL is immediately taken to judgement.

— After being arrested, JESUS is immediately taken to judgement.

#9.   DANIEL is found guilty, transgressing the Law of the Medes and Persians.

— JESUS is found guilty of transgressing the Law of the Jews.

#10.  DARIUS is deeply distressed that DANIEL must be sentenced to the Lions’ Den, even though Darius is the one who sentences him.

— PONTIUS PILATE is deeply distressed that JESUS is to be sentenced to the Cross, even though Pilate is the one who sentences Him.

— The WIFE OF PONTIUS PILATE is troubled in her sleep.

#12.  DARIUS pours over the Law to find some way to save DANIEL before the sentence is to be carried out.

— PONTIUS tries to find a way to save JESUS.

— He tries flogging Him…

— Offers to release Him…

— But the crowd chooses Barabbas instead.

#13.  The satraps have DARIUS cornered.

— The PHARISEES have PILATE cornered.

— JESUS is placed in a tomb.

— A giant rock is placed in front of the TOMB.

#16.  The KING’S SEAL is placed over the rock, so if anyone breaks the SEAL they will be killed.

— A ROMAN SEAL is placed over the rock, so if anyone breaks the seal, they will be killed.

— While JESUS is in the tomb His followers are lost and confused.

#18.  All possibility of escape is cut off and DANIEL is dead.

— All possibility of escape is cut off.  JESUS is dead.

— A heavenly being appears in the Tomb.

— At first light (dawn), the women rush to the Tomb.

— The women are given the good news that JESUS is alive!

#22.  DANIEL lives to prosper in the Medo-Persian kingdom.

#23.  DARIUS proclaims to the world that God’s Kingdom will never be destroyed.

— The FOLLOWERS (that’s us too) of JESUS proclaim God’s Kingdom…the Gospel Message to the world.

The listed comparisons are but examples of the divine inspiration of the Bible.  ALL the SIMILARITIES can’t be an accident, a coincidence, or simply reading too much into the stories.

Since the Old Testament and the New Testament thus are inseparably–connected as parts on one grand system of revelation of which the end is Christ Jesus, it follows that the latter New Testament revelations are the true interpreters of the Old Testament.  This is only saying that the Holy Spirit is the true and proper expositor of His own communication to man.  Start trying to do your own comparisons of the written Word and Listen for the enlightenment that comes from the Spirit of God.

5 thoughts on “The Lions’ Den and The Tomb”