[9] A third angel followed and said in a loud voice:  “If anyone worships the beast and his image and receives his mark on the forehead or on the hand,  [10] he, too, will drink of the wine of God’s fury, which has been poured full strength into the cup of His wrath.  He will be tormented with burning sulfur in the presence of the holy angels and of the Lamb.  [11] And the smoke of their torment rises for ever and ever.  There is no rest day or night for those who worship the beast and his image, or for anyone who receives the mark of his name.”

Now I’m no great Bible Scholar, I haven’t studied at any Bible College or Seminary, and I make no claims to know all there is to know about the prophecies of REVELATION.  I intentionally skipped through the chapters (5-13), bypassing debate on the hidden prophetic gems, but encourage you to read and jot down your own notes and detective investigation.

That being said, I don’t believe that anyone, no matter how many degrees they may have earned from educational institutions, could say they fully understand it all either.

There are some things in God’s Word that He has not revealed with sufficient detail for us to know all about it.  We only need to know what He says will happen.

THE MARK OF THE BEAST–

One matter of prophecy that has always been a source of ‘head scratching’, a puzzlement is how much guesswork by everyone who takes the Bible literally the Mark of the Beast.

We all want to know, “What is that Mark”,  “When will it be given” and “How can I keep from receiving it, even by accident?”

There is a great passage of Scripture that most of us have all read many times.  I get a thrill reading it every time: The Book of First Thessalonians, Chapter 4.  Every time the image crosses my thoughts, I silently pray,

“Lord, help me to be ready when this day comes!”

According to the Lord’s own word, we tell you that we who are still alive, who are left till the coming of the Lord, will certainly not precede those who have fallen asleep.  For the Lord Himself will come down from heaven, with a loud command, with the voice of the archangel and with the trumpet call of God, and the dead in Christ will rise first.  After that, we who are still alive and are left will be caught up with them in the clouds to meet the Lord in the air.  And so we will be with the Lord forever.

Of course we all refer to the fulfillment of this prophecy as the “RAPTURE of the Church”–“The Blessed Hope.”

Although the word “Rapture” is never found in Scripture, but the event describes a “catching away” or “caught up” and that’s what “Rapture” means.

THREE MAJOR SCHOOLS OF THOUGHT OF THE COMING“TRIBULATION”–

I am not going into explaining all the details in this POST, but I will give you a list that most are familiar with:

#1.  PRE-TRIBULATION BELIEVERS:  The RAPTURE or “catching away” of the Church must take place BEFORE the Antichrist is revealed.

#3.  Those who don’t believe in the RAPTURE at all.  They are convinced that believers will continue on through the Tribulation, and those who survive will just walk into the New Jerusalem joining all who have died in the past.

What do I believe?

My decision is believing that the “Rapture” must take place before the Antichrist can rise to power; before the beginning of the Tribulation.  In all my Bible studies, I’ve never seen one time where the Church (BELIEVERS) is subject to God’s judgment and wrath as it is poured out in the earth.

I could give you a lot of bible verses to support my position on the “Rapture,” but my point in this study is NOT to convince you of my point of view.  My point is that JESUS is coming soon and we need to see the SIGNS of His coming and make ourselves ready.

If you want one bible passage that points to the “Pre-Trib” Rapture, this is one of them.

[7] For the mystery of lawlessness (that hidden principle of rebellion against constituted authority) is already at work in the world, [but it is] restrained only until he who restrains is taken out of the way.  [8] And then the lawless one (the antichrist)  will be revealed and the Lord Jesus will slay him with the breath of His mouth and bring him to an end by His appearing at His coming. [Isa. 11:4]  [9] The coming  [of the lawless one, the antichrist] is through the activity and working of Satan and will be attended by great power and with all sorts of [pretended] miracles and signs and delusive marvels–[all of them lying wonders–  [10] And by unlimited seduction to evil and with all wicked deception for those who are perishing (going to perdition) because they did not welcome the Truth but refused to love it that they might be saved.  [11] Therefore God sends upon them a misleading influence, a working of error and a strong delusion to make them believe what is false,  [12] In order that all may be judged and condemned who did not believe in [who refused to adhere to, trust in, and rely on] the Truth, but [instead] took pleasure in unrighteousness.”

He cannot be revealed as the Antichrist while the church is here; for we have the power of prayer, the anointing of the Holy Spirit. the power to bind him in the earth and…to limit his power through the Blood of Jesus Christ.

So it is impossible for the devil to take control of this world completely until that POWER (indwelling Holy Spirit) that limits him is removed.  Only then can he rise and become the world’s greatest dictator. 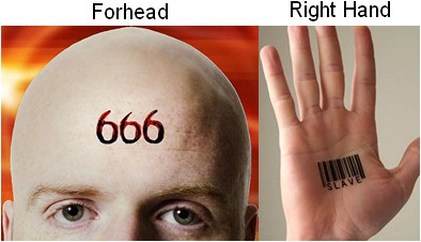 After the Antichrist rises to power, one of the things he does is to implement a method of complete control over every man, woman and child on the face of the earth.

His whole purpose is to force every living person to worship and serve him, he’ll use the MARK to track them and control their every move.

[16] Also he compels all [alike], both small and great, both the rich and poor, both free and slave, to be marked with an inscription [stamped] on their right hands or on their foreheads,  [17] So that no one will have power to buy or sell unless he bears the stamp (mark, inscription),  [that is] the name of the beast or the number of his name.  [18] Here is [room for] discernment [a call for the wisdom of interpretation].  Let anyone who has intelligence (penetration and insight enough) calculate the number of the beast, for it is a human number [the number of a certain man]; his number is 666.

Now, if you believe that the RAPTURE of the church must come before the Tribulation begins when the Antichrist is revealed, then you don’t have to worry about the Mark of the Beast.  The MARK isn’t even given till halfway into the Tribulation when we will be in heaven.

If you want to believe the RAPTURE will come at the halfway point, or that there will be no RAPTURE at all, I can understand your concern of the Mark of the Beast and why you might worry.

I can tell you this.  If you are truly BORN AGAIN, your heart is right with God, and you are washed in the Blood of the Lamb and you are staying faithful to call of God on your life, then you can never take the MARK, not even by accident.  So don’t be concerned about what the world is doing that might look like it’s creating a way for the Mark of the Beast can be given.

Everything you see, pointing toward the day when the “MARK” will be given, is nothing more than God’s hand, working in the minds of men, bringing the technology and the methods by which the Antichrist is able to fulfill the plan of God–the Antichrist and Satan’s downfall and defeat.

There was an article that I read recently that impressed upon me just how close we are in coming to the RAPTURE; of the church and the revealing of the Antichrist during the Tribulation.  I want to share part of the article for you to see one way that this MARK of the Beast could be given.  [See Footnote [i] for reference]

Some Swedish workers can now enter their building without a key, make purchases at the office cafe with a sans card–with a chip implanted in their hand, the BBC reports.

Not all are accepting it, but its been offered to some 400 workers…”We already interact with technology all the time.  Today it’s a bit messy–we need pin codes and passwords.  Wouldn’t it be easy to just touch with your hand?  That’s really intuitive.”

What will the “MARK” be?

— Will  it be a CHIP implanted either voluntarily or forcibly?

— Will it be a STAMP of invisible ink on the hand or the forehead?

— Will it be some other technology we haven’t even seen yet?

— Will it be a DNA reader that tracks your DNA by simply touching a screen?

— Will it be a GPS that tracks your location?

—  A satellite that can read the magnetic strips on a credit card, or some new invention?

I believe that the “MARK of the Beast” will be a literal mark, but I also believe that people will take it willingly if that day should come for you.

You will take it willingly because you will know the difference between life and death and…you won’t want to die!  You will willingly take that “MARK” to live in this world but when you take it, you will forfeit your inheritance–your promised eternal life–choosing to die.

“WHY WORRY ABOUT THE MARK OF THE BEAST IF YOU DON’T HAVE TO?”

Here’s the point of this particular blog-study I’m revealing to you:

You can accept JESUS as LORD right where you are when the RAPTURE comes and go to be with Him and all of us who are ready before the Antichrist is revealed.  You won’t be here on earth for the Mark of the Beast.  You’ll be in Heaven, having the time of your life, praising the Lord Almighty and enjoying all His benefits.

You can choose to reject Jesus and face the day where you will have to take that MARK, being eternally lost.  Or, you choose to accept JESUS now and live for Him, never seeing that MARK, nor will you ever die spiritually.  Jesus will give you eternal life.

Are you ready for the Rapture?  Will you come to Jesus?

The questions are far more important than “What will the Mark of the Beast be?

3 thoughts on ““RAPTURE READY!” – Part Four of the REVELATION TO JOHN”