I left off in PART ONE– A “Lackawanna” Lifestyle– on Lawlessness; what it is and what it isn’t.  Lawlessness, pure and simply stated is… “open rebellion against God; having no regard of what GOD thinks or says”:

The Amplified Bible says it this way:

Everyone who commits (practices) sin is guilty of lawlessness; for [that is what] sin is, lawlessness (the breaking, violating of God’s law by transgression or neglect–being unrestrained and unregulated by His commandments and His will).

If we’re really saved, we won’t do that–“practice sin”.  We may disobey GOD once in a while, but a true believer won’t practice sin.

I can remember when I was about 12 years old, I begged my parents for an Electric Steel Guitar.  Not just a ‘plain old guitar’ but a “Steel Guitar”.  So, they decided to grant my request with the following conditions: “We will get you a “used” one first.  Then, after lessons and ‘practicing diligently’, maybe, just maybe we will get you a newer one with a guitar stand.”

My first guitar laid across my lap!  Bummer!!  What will my buddies think?  They won’t think I am playing the ‘genuine’ instrument–without a stand?

If you want to get really good at doing something, you need to practice.  I never liked to “practice”, so the lessons stopped and so did my guitar playing.

If you keep on practicing sin–lawlessness–you will become really good at it.  Do you have an instrument used for sin; laying there on your lap, or if you are really good at it…on a display-stand so everyone can see it?  Do we know someone who says they’re Christian, but keeps on practicing open sin?  John says they aren’t saved!  A true believer can’t do that.

You know that He [GOD] appeared in visible form and became Man to take away [upon Himself] sins, and in Him [JESUS] there is no sin.      (verse 5).

— JESUS died on the cross to take away our sins.  And, because He had no sin, He could pay sin’s penalty.  Our sin is gone!

We don’t have to practice sin anymore.  Why won’t a true believer keep on sinning?  Here comes a terrific Theological Answer to the question:  FIRST, John says… you don’t have to.

“No one who [habitually] sins has either seen or known Him [recognized, perceived, or understood Him, or has had an experiential acquaintance  with Him]”  (1 John 3:6 (b)).

A group of teenagers were enjoying a party [we’ve probably all been there and could tell some stories!].  Someone in the crowd suggested they all go to a certain “restaurant” and have a really good time!

“I’d rather you took me home”, the girl said to her date.  “My parents don’t approve of that place.”

“Afraid your father will hurt you?”  One of the girls asked sarcastically.

“No, I’m not afraid my father will hurt me.  But I am afraid I might hurt him!”

She understood:  A true child of God knows Father God–

—  They see and know His love.

—  They love God and in loving Him, they don’t want to sin against His love.

Now we have John’s 2-part reason why true believers can’t keep on sinning:

When it comes down to practicing righteousness, God’s love HEALED their “Lackawanna”.

“Dear children, do not let anyone lead you astray”

Some in John’s community were arguing over what God’s GRACE meant–it didn’t matter that they kept on sinning.  John is warning us– That isn’t true!  Choosing to do what’s righteous matters!

Has there been a CHANGE in our lifestyle since we were SAVED?  Or, are we still practicing sin?

John is saying we were we were never SAVED if there is no change!  And even more, we’re supposed to be changing for the better– forever.  The apostle reminds us in the Book of Romans,

“Do not conform any longer to the pattern of this world, be be transformed by the renewing of your mind.  Then you will be able to test and approve what God’s will is–His good, pleasing and perfect will”  (Romans 12:2 NIV).

That “renewing” Paul is talking about, isn’t a once-in-a-lifetime event.  It is ongoing–everyday of your life happening.  I think that it is the second most important decision you will ever have to make in life; next to your decision of accepting JESUS as Lord and Savior.

We ought to be making PROGRESS…

“[But] he who commits sin [who practices evildoing] is of the devil [takes his character from the evil one], for the devil has sinned (violated divine law) from the beginning.  The reason the Son of God was made manifest (visible) was to undo (destroy, loosen, and dissolve) the works the devil [has done].”

SATAN (the devil) holds the lost in his power-grip.  A Christian is held by Christ’s POWER.  When a lost person is found–becomes a born-again Christian–Satan’s power is broken.  They don’t have to practice sin any more–and they don’t want to!

If JESUS sets us free from the slavery of practicing sin, we won’t practice sin anymore–no lessons, no instruments available for sinning when we don’t practice.

Just the opposite, we’ll be working hard at becoming more Christ-like.  We’ll love Him too much not to!

GOD PLANTS THE SEED OF JESUS:

“No one born (begotten) of God [deliberately, knowingly and habitually] practices sin, for God’s nature abides in him  [His principle of life, the divine sperm (seed), remains permanently within him]; and he cannot practice sinning because he is born of God”  (verse 9).

In every christian, the SEED is planted.  It’s done at our REBIRTH.  His seed (His holy nature) can’t sin.  And, at our rebirth, we receive a new nature–Christ’s.

His nature can‘t sin because…He can’t.  Whenever we do sin, it’s our old nature sinning.  When we die, our old sinful nature (attached to our sinful physical body) will die too.  It was predestined long ago.

In Christ JESUS, it was put to death at Calvary.  But it’s taking a long time to die.  When JESUS takes us home, all that will be left is our new nature.  The lost (the unsaved) have only the old nature that has never been put to death.  So it still lives to rule and reign in their hearts.  It will have to be JUDGED–THEIR UNRIGHTEOUS SEED IS ALL THEY HAVE.

A Good Tree and its Fruit–

Can there be any doubt on how we live our lives becoming a SALVATION issue?  John isn’t saying it’s our deeds that save us.  BUT, he is saying clearly what JESUS said in Matthew 7:17 and Matthew 12:33: 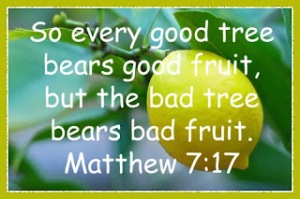 A “good tree” (from the “good seed”) produces good fruit–and a bad tree–bad fruit.  The FRUIT always reveals what kind of tree it is.

WHEN JESUS SAVED US…

GOD planted a new seed in us–and it will bring forth fruit–our good works.  And as we mature in Christ, the fruit matures in its appearance; the more evidence there’ll be in our life that we’re SAVED!

According to John, like that expression I heard in the late 1970’s,  “If we were put on trial for being a Christian, would there be enough evidence to convict us?”

GOD GETS THE GLORY!

It comes down to the bottom line on the ‘fruit bearing’ in our lives.  Are we doing so because of the accolades we will receive from others to our self-glory…or the roses we receive laid at the feet of JESUS?

One thought on “A “Lackawanna” Lifestyle – [Part Two]”