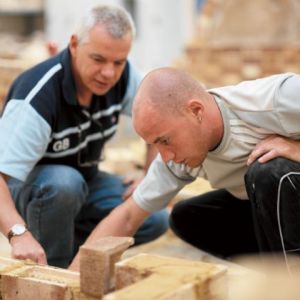 An Apprentice in Training

And then there’s the THIRD MOMENT in our Apprenticeship:

More precisely, Mark tells us that Bartimaeus “accompanied Jesus on the road” (Mark 10:52 AMP).  There is no substitute for “following“.  Mark uses several metaphors to speak of discipleship.  But Mark’s favorite metaphors are:

Over and over again Mark refers to Jesus as walking on the road with His disciples as they accompany Him as He teaches them all.  It is while they are walking the Way, their understanding grows of the truth of God; small at first then filled out and fruitful.

According to the literature handed out at many Trade Union Headquarters, its “a combination of on-the-job training with related classroom instruction under supervision of a journey-level person.  Where the workers learn the practical and theoretical aspects.  After completion of the apprenticeship program, the worker’s journey-level status provides an additional mobility journeyman.”

It’s on the Way; on-the-job training where in the process disciples learn.  Not merely the meaning of discipleship but more importantly…how to live it.

It’s on the Way they learn what it is to have their profession of loyalty to Him, colliding with a world that ridicules loyalty and mocks the idea of discipleship.  We should see immediately that what counts above al else concerning discipleship training, isn’t how much we understand but it’s what we do with even a little that we understand.

Speaking for myself, I have long thought many people think of discipleship in Christ’s company, as something like going to school.  That is partly due to the many church programs entitle “Discipleship Training.”  The school curriculum has to be learned so discipleship has to be learned.  The problem arises, while school learning is largely abstract–we have to learn historical concepts, scientific theories, mathematical axioms.  While school learning is abstract, discipleship is entirely solid as concrete.

When Jesus came upon some people who claimed to be His followers yet preferred the abstract to the ‘concrete’, He turned things around on them and said, “Why do you call me ‘Teacher’ and ‘Lord’ and yet you don‘t do what I command you?”

If we want to learn what it is to be a follower of Jesus Christ, we mustn’t think it’s like going to school.  Instead we must understand its like being that apprentice; the plumber; the brick layer who doesn’t read 30 books and announce “I think I’ve got it now!”  They learn from a journeyman plumber or brick layer.  He or she learns on the job while doing, while observing; learning through many mistakes that the attending journeyman corrects in their doing.

Disciples live in the company of Jesus Christ.  He is both the Way we are to follow our companion on the Way, both simultaneously.  Discipleship isn’t armchair acquisition of theories and axioms about the Christian life.  Discipleship is a matter of doing in the company of our Journeyman, who has done it all before us.  It is far more important we live a little, that we understand; than it is to understand much then fail to live it.

Once Jesus had made Bartimaeus to see, He didn’t say, “You’d better start studying for the exam.”  What Jesus did say, “follow Him!”  Bartimaeus was to follow-up his deliverance from blindness with following after Jesus forever.  There is no substitute for following.

While there is certainly no substitute, there are many evasions, side-steps to avoiding the Way; venturing off the Road.  Paul Bunyan’s The Pilgrim’s Progress is the allegorical tale of Christian the pilgrim on his journey to the Celestial City.  Along the way, Christian encounters ‘side-steps’ and ‘evasions’ in his travels.  Although the book was written over three hundred years ago, this stirring narrative still bears the power to challenge and encourage readers on their own spiritual journeys.

One side-step is doing nothing;

Doing nothing while throwing around religious clichés, stock expressions, code-words on the church front.  Some examples might be peppering our conversation with words such as “saved”, “blood”, “the almighty” and so on.  Now there is nothing wrong with the words by themselves, but it’s often assumed when used, they must be from a long-time follower on the Road.  At the same time, if someone doesn’t use this vocabulary or can’t, it’s assumed she hasn’t even begun the journey.  Both assumptions are false!  To often tossing out the Christian code words often is a cover-up in evading the Road.  The test of discipleship isn’t what we say but what we do.  That’s why the apostle Paul write, “If you are children of the light, then walk in the light.” ~ Ephesians 5:8

Another evasion is substituting rites and rituals of the church for faith and obedience;

Baby Dedication as a sign of God in His mercy, makes a provision for this particular child in anticipation of the day she or he owns, owns for herself, owns for herself in faith.  The provision of grace and mercy that God has fashioned for any given family.  But if we think that Baby Dedications as a substitute for faith and obedience that anticipates, then we are dabbling in voodoo.  Do I think Baby Dedication is wrong?  Absolutely not.  The reasons for doing so in substituting a church practice for obedience is the issue here.

In the service of Dedication, parents declare publicly that they themselves, at this moment are walking the Road.  They want their children to come to walk with them.  If, however, the parents think Baby Dedication in the church renders the child’s subsequent discipleship, they are being deceived.

Only One Thing Matters:

When Jesus called His disciples to follow Him; urged them to follow ever closer, He knew and they knew that they understood very little.  They in fact likely understood only one matter:  Life in His company was going to be better than life not in His company, being sure their understanding grew.

Mark’s understanding swelled…until he could write the gospel narrative.

Peter’s understanding was enlarged…until he could write his unparalleled letters.

But they didn’t begin there, they began with a simple following, perforated with:

— sometimes a zeal which overwhelmed wisdom in their doing.

All that mattered was that now, they were on the Road, undertaking the journey as apprentices; learning from the Journeyman Himself.

If we have received only enough light for one step, let’s be sure to take that one step.  Does it ever occur to us we can take only one step at a time in any case?  Does it ever occur to us that Jesus Christ is light; enough for one more step today and we go ahead and take it?  And then that same Light will be bright enough for another step tomorrow?

“The Making of a Disciple” begins with Bartimaeus:  Our need of illumination and resources for living brings us to shout out to Jesus, “Have mercy on me”.  It all begins as we hear our Lord’s response to our cries; take heart and have courage since help is around the corner.  It matures as we follow Him on the Way every day, receiving greater confirmation.  He is the Way only because He’s also Truth.  And for this reason will prove to be our life.

“But he who practices truth [who does what is right] comes out into the Light; so that his works may be plainly shown to be what they are–wrought with God [divinely prompted, done with God’s help, in dependence upon Him]”  (John 3:21).

I pray that the focus on following Jesus in discipleship has been enlightening in your apprenticeship.  If it has, you are well on the Way to be filled and fruitful life!