In 2008, I requested the publishers of “Romancing the Divine”  by Don Nori, if I could receive copyright permission to turn his book into a Christian Drama for the community stage; to condensed the book into a three-act play.  This fiction novel is an allegory and it begins where Pilgrim’s Progress ends.

After back and for emails and almost six months, I received permission with one stipulation: “No money from tickets could come from the play into Mel’s pocket.  Of course I agreed and was thrilled to get Mr. Nori’s okay.  I might add, I don’t like to read allegories!  My wife encouraged me to read it; it was definitely Holy Spirit’s doing.  The play has never been produced but I am hoping…

“I sat there on the Mercy Seat for the longest time, enjoying His Presence, but sorry that this was only a vision of what had already occurred in eternity.  I knew that at any moment He would awaken me or do whatever it was He did to take us back to where we had begun this side trip.  The Lord had used these wonderful adventures to teach me [‘to open spiritual eyes’] some of the most incredible things, but this was truly the most incredible of them all”  (Chapter 18, first paragraph). 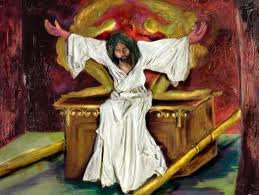 TWO ARTICLES OF FURNITURE IN THE HOLY OF HOLIES

At first glance, it appears to be just one piece of furniture but at closer examination, it reveals two.  The MERCY SEAT furnished a top for the ark.  They appeared to be the same thing but in reality, they are separate and distinct.  The instructions however, for both are given together.  The blueprints for the mercy seat follows the blueprint of the ark in Exodus 25:17-22.

The mercy seat was a top for the ark.  It was made of pure gold and out of the mercy seat there were two cherubims of gold.  It was highly ornamented, probably a special work of Bezaleel.

God interjects this revealing declaration:  “There I will meet with you and, from above the mercy seat, from between two cherubim that are upon the ark of the Testimony, I will speak intimately with you of all which I will give you in commandment to the Israelites”  (Exodus 25:22).

On the great Day of Atonement, God issued a warning to Aaron not to come at all times within the veil (Leviticus 16:2).  On the wilderness march from above the mercy seat between the cherubim, God directed Israel in the right paths.  When Moses was gone into the Tabernacle of the congregation to speak with Him, he heard a voice of one speaking to him from off the mercy seat; on the ark of the testimony, between two cherubim  where He spoke to Moses (Numbers 7:89).

THE TEACHING APPROACH OF THE MERCY SEAT

It is essential to see what made it a “mercy seat”.  First, you must consider the great Day of Atonement.  On this day only, the high priest approached the mercy seat; during the time of the great Yom Kippur; kapar in Hebrew means “to cover over, atone, propitiate, pacify.”  This root is found in the Hebrew language at all periods of its history (Vine’s Complete Expository Dictionary).

During this time, Aaron cast lots for the scapegoat and offered the other goat on the burnt altar of bronze.  After Aaron offered a bull for himself, he brought the basin of blood within the veil and then sprinkled it on the mercy seat.  The blood made it a mercy seat; God didn’t look down on the merits of Aaron or the goodness of the people.  What He saw was the blood.  Jesus is on the mercy seat today!

“Whom God put forward [before the eyes of all] as a mercy seat and propitiation by His blood [the cleansing and life-giving sacrifice of atonement and reconciliation, to be received] through faith.  This was to show God’s righteousness, because in His divine forbearance He had passed over and ignored former sins without punishment”  (Romans 3:25—Amplified version).

God is propitious today toward the world; He is “mercy-seated” toward it.  It’s immaterial to try to do something; to make grounds to approach God; God has already done that work.

I am a very visual person, so in my reading of The Gospel According to Luke, I got this picture of the mercy seat’s meaning:

“And they found the stone rolled back from the tomb.  But when they went inside, they did not find the body of the Lord Jesus.  And while they were perplexed and wondering what to do about this…”

“Two men in dazzling raiment suddenly stood beside them.  And as [the women] were frightened and were bowing their faces to the ground, the men said to them, Why do you look for the living among [those who are] dead?  He is not here, but has risen!  Remember how He told you while He was still in Galilee.  That the Son of Man must be given over into the hands of sinful men and be crucified and on the third day rise [from death]”  (Luke 24:2-7).

The curtain veil had been rent at Christ’s death and the mercy seat can be seen by all who have faith to believe in the blood that He shed for all of us. When the women went into the tomb, they saw two men; angels, cherubim perhaps standing over the stone slab; the “mercy seat“.  The ultimate sacrifice was now completed and death had been defeated.

God doesn’t have to be won over by sinful man; He is already won over.  God’s face is not turned away from the world in anger because of His Son final sacrifice.  God is Love!  (1 John 4:8, 10).

When the Son of man stood between God and man, He came forward, bore the penalty that there might not be anything that would shut out man from the heart of God.  He says, “Come on, come on, I have provided a mercy seat.”

GOD NOW CAN SAVE THE UNSAVED

God can save who does no more that to trust in Jesus.  The question now is, “Will you be reconciled to God?”  God is waiting and wanting and yearning; to save the last, the least and the lost.  The publican or sinner who doesn’t have to cry for mercy now.  God has a meeting place for sinning man to come too.  There is a mercy seat in heaven.

People can talk about committing the ‘unpardonable sin’ today, but what does that phrase actually mean?  There is no act that one can commit today, shutting out that one way from the mercy seat.  To remain in a state of unbelief alone will shut one out.  There is a MERCY SEAT!  I have just taken you as a Traveler through the Tabernacle; from the outer courts into the Holy of Holies.  Can you say hallelujah?

Living, He loved me

Dying. He save me;

Buried He carried my sins far away.

7 thoughts on “The Mercy Seat of Gold: “Romancing the Divine””